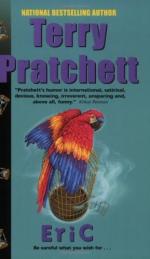 Terry Pratchett
This Study Guide consists of approximately 29 pages of chapter summaries, quotes, character analysis, themes, and more - everything you need to sharpen your knowledge of Eric.

This detailed literature summary also contains Topics for Discussion and a Free Quiz on Eric by Terry Pratchett.

Eric, by Terry Pratchett, is the story of a incompetent wizard named Rincewind and a thirteen-year-old boy named Eric. Eric summons a demon but unexpectedly gets Rincewind, who had been trapped in the Underworld after fighting a sourcerer. The two set out on an adventure that eventually will help out the course of the universe and return the Underworld to normal.

There is a large commotion in the city of Ankh-Morpork. Death is summoned to the Unseen University in Ankh-Morpork where he reveals these magical disturbances have been caused by a wizard named Rincewind. Rincewind had been pulled into the Underworld after battling a sourcerer. It had been thought that Rincewind was dead. The wizards decide that they are not concerned with these events despite the trouble that it has caused in the city.

Not too far off from the Unseen University Rincewind awakens to find himself in a room with an odd looking demonologist, a person who calls on the power of demons. The demonologist, Eric, was trying to call forth a demon in order to get his wishes granted. Eric wants to have mastery of the kingdoms of the world, to meet the most beautiful woman who has ever lived and to live forever. Rincewind is unable to convince Eric that he is not a demon and upon snapping his fingers finds that magic is produced. Rincewind is further upset by the fact that Eric is only thirteen.

In Hell, Lord Astfgl, the recently appointed king of the demons, is upset to find that Rincewind is the one that went through when Eric called, since Astfgl's demon Duke Vassenego was supposed to go through and corrupt the boy to their own purposes.

Eric's wishes are granted but each one ends badly and answers the wish fully without giving him anything that he is wanting. Eric and Rincewind end up at the beginning of time and so Eric reproduces the spell that brought Rincewind out, only backwards, taking both of them to Hell. Once in the Underworld they discover that things have been turned backwards by Astfgl, who insists on boring people to death rather than old fashioned torturing. Duke Vassenego is able to trick Astfgl into taking over another position because of Rincewind and Eric's presence in the Underworld. Eric and Rincewind are able to go free by traveling out along the road that is paved with good intentions. The universe has been corrected as well as the Underworld. The demons are happy because they can torture again and the damned souls there are happy because they know that things could always be worse.

More summaries and resources for teaching or studying Eric.