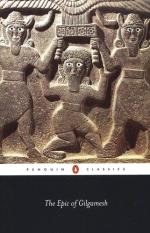 The Epic of Gilgamesh Summary & Study Guide includes comprehensive information and analysis to help you understand the book. This study guide contains the following sections:

This detailed literature summary also contains Quotes and a Free Quiz on The Epic of Gilgamesh by Anonymous.

The Epic of Gilgamesh is a poem written on stone tablets sometime between 2700 B.C. and around 600 B.C. in Mesopotamia. Not all of the tablets survived intact, therefore scholars can only guess at what certain sections of the poem are meant to say. The poem itself is about the hero Gilgamesh, a man who is half god and half human. Gilgamesh is stronger and more powerful than the people of his village, Uruk, causing great unhappiness among the people. For this reason, they ask the gods to make another man who would rival Gilgamesh. This man is named Enkidu. Gilgamesh and Enkidu become good friends, but trouble follows them wherever they go. The Epic of Gilgamesh is one of the earliest known pieces of literature that has survived.

Gilgamesh,the king of Uruk, is stronger and more powerful than those around him. Gilgamesh likes to show off, and this causes a great deal of unhappiness for the people of his kingdom. For this reason, they pray to the gods to make a man who is Gilgamesh’s equal. The gods create Enkidu and leave him in the forest. Enkidu is more beast than human at first, causing the trappers in the area a great deal of trouble. For this reason, the trappers introduce him to Shamhat, a female follower of the god of love and war, who helps to civilize Enkidu by introducing him to the ways of humans.

One day, Enkidu meets a man who is planning to attend a wedding in Uruk. The man tells Enkidu about the ritual of first night in which Gilgamesh has the right to lie down with the bride before her new husband. Enkidu finds this repulsive and goes to the bride's home to protect her from Gilgamesh. When Gilgamesh arrives, there is a violent fight. Gilgamesh wins, but Enkidu so respects his fighting skills that he quickly becomes his friend.

Gilgamesh wants to go with Enkidu to the Cedar Forest to kill the beast that lives there, Humbaba. Everyone tries to talk him out of it, including Enkidu, but Gilgamesh will not back down. On the trip to the Cedar Forest, Gilgamesh has nightmares every night. Enkidu interprets the nightmares into pleasant things, assuring Gilgamesh that everything will be alright. When they arrive to confront Humbaba, Gilgamesh changes his mind and wants to turn away. Enkidu, however, talks him into going forward with the battle.

During the fight, Humbaba does all he can to talk Gilgamesh and Enkidu out of killing him. Eventually, Gilgamesh slays him. Afterward, they cut of Humbaba’s head and return to Uruk triumphantly. During the celebration, the goddess Ishtar asks Gilgamesh to make her his wife. When he refuses, Ishtar brings the Bull of Heaven to Uruk to kill Gilgamesh. However, with Enkidu’s help, Gilgamesh slays the bull.

The gods are upset at Gilgamesh and Enkidu for killing Humbaba and the Bull of Heaven. For this reason, they decide one of the men must die. They choose Enkidu. In a short time, Enkidu becomes ill and dies. Gilgamesh is deeply grieved by this. Gilgamesh goes into the wilderness to find his ancestor named Utanapishtim, who can help him become immortal. After telling Gilgamesh his story, Utanapishtim challenges Gilgamesh to prove he is worthy of immortality by staying awake for six days and seven nights. Gilgamesh fails, but Utanapishtim tells him where he can get a plant that will return him to his youth. Gilgamesh finds the plant; but, before he can eat it, a snake eats it.