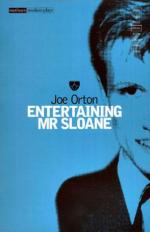 Joe Orton
This Study Guide consists of approximately 58 pages of chapter summaries, quotes, character analysis, themes, and more - everything you need to sharpen your knowledge of Entertaining Mr. Sloane.

Loot (1965) and What the Butler Saw (1969) are Orton's most famous plays and works that clearly show his mastery of stage farce.

Not in Front of the Audience: Homosexuality on Stage (1992), by Nicholas de Jongh is a thorough and interesting history of the portrayal of homosexual characters in theatre.

The Orton Diaries, (1986) edited by John Lahr, records the last eight months of Orton's life from December 1966 to August 1967, and includes entries from the diary Orton occasionally kept as an adolescent. Alarmingly explicit in its references to sexuality, these diaries create a portrait of Orton that helps the reader understand the audacious tone and themes of his plays.

The Room (1957) and The Birthday Party (1958) are two plays by fellow British dramatist Harold Pinter that clearly influenced Orton's early work The Homecoming (1965) is a Pinter play that also involves an "intruder" and sexual...

Entertaining Mr. Sloane from Gale. ©2005-2006 Thomson Gale, a part of the Thomson Corporation. All rights reserved.