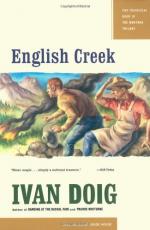 Jick is the central character and narrator of the story. He is fourteen when the book opens, with his fifteenth birthday approaching at the summer's end. He's at an age where he is just beginning to try to define himself as something entirely separate from his brother to whom he has always looked up. When Alec defies his family by turning down the chance to go to college in a sudden rebellion to run his own life, Jick begins to question whether he really is like Alec.

Jick is an extremely contemplative boy who loves to think about the history behind people and places. He is constantly trying to prod people into telling him stories of the past. He also will ask his parents, Stanley Meixell and his best friend Ray about philosophical questions that are always brewing in his head.

Jick enjoys accompanying his father while...