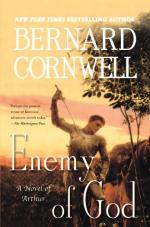 Enemy of God: A Novel of Arthur Summary & Study Guide

Bernard Cornwell
This Study Guide consists of approximately 65 pages of chapter summaries, quotes, character analysis, themes, and more - everything you need to sharpen your knowledge of Enemy of God.

Enemy of God: A Novel of Arthur Summary & Study Guide includes comprehensive information and analysis to help you understand the book. This study guide contains the following sections:

This detailed literature summary also contains Topics for Discussion and a Free Quiz on Enemy of God: A Novel of Arthur by Bernard Cornwell.

Enemy of God by Bernard Cornwell continues the story of Arthur begun in The Winter King, showing Arthur uniting Britain to expel the invading Saxons, and Christians persecuting pagans to prepare for Christ's Second Coming. In the end, Arthur has to accept the power of kingship, which he has long rejected, without its trimmings.

Arthur, who refuses to be King of Dumnonia, is uniting the kings of Britain to expel the Saxons from occupied eastern lands and arranging for the education of underage King Mordred. Christian-Druid antagonism is growing, but Arthur will not suppress Christians as his ancient Druid Merlin demands. Nor will he support Merlin's foolish quest for the lost Cauldron of Clyddno Eiddyn, greatest of the hidden Treasures of Britain. Merlin takes his priestess Nimue, narrator Derfel Cadarn, and Princess Ceinwyn, who has chosen Derfel over King Lancelot, on a nearly fatal journey along the "Dead Road" to Ynys Mon, where they liberate the Cauldron.

Most of the British kings rally and march on London to fight the Saxon King Aelle. Lancelot is left to guard the southern coast to protect against an attack by Aelle's rival king Cerdic. The Britons beat their foe only to see Lancelot and Cerdic ride up as friends, having made a peace treaty without Arthur's knowledge or permission. Arthur must agree. He uses the time of guaranteed peace to bring prosperity to Britain. Derfel, writing as an aged Christian monk, debunks the legends of "Camelot" and the "Round Table." Young Mordred comes of age and quickly shows he is unfit to rule, but Arthur clings to hope and will not break his oath of loyalty. To Arthur, oaths are so fundamental to civil order that he allows the lovers Tristan and Iseult to perish because of their oaths to Tristan's father. This rigor drives a wedge between Derfel and Arthur.

Lancelot and grasping Bishop Sansum conspire to eliminate Arthur, Derfel, and Mordred to clear the way for Lancelot to usurp Dumnonia. Derfel learns of his Saxon ancestry, loses a beloved daughter to Lancelot's henchmen, and accompanies Arthur on a commando raid to release Arthur's wife and son from Lancelot's clutches. He learns that Guinevere and Lancelot are lovers, disguised as devotion to the Goddess Isis. Lancelot is allowed to go away in shame but Guinevere cannot accompany him. Mordred is reduced to figurehead monarch and Arthur becomes de facto Emperor of Britain.

More summaries and resources for teaching or studying Enemy of God: A Novel of Arthur.

Enemy of God: A Novel of Arthur from BookRags. (c)2022 BookRags, Inc. All rights reserved.