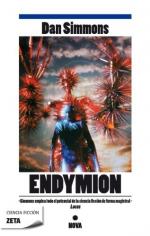 This detailed literature summary also contains Topics for Discussion and a Free Quiz on Endymion by Dan Simmons.

Endymion by Dan Simmons is a science fiction story of destiny and heroes. Aenea, the daughter of a cybrid and famous Hyperion pilgrim, travels 250 years into the future, to the year 3099 A.D., beginning her journey to become The One Who Teaches. She travels with a Raul Endymion and an android Bettik to find Old Earth, which is a planet everyone else believes has been destroyed.

At the age of twelve, Aenea enters the Sphinx in the Valley of the Time Tombs on the planet Hyperion. Pax soldiers, the Vatican's army, are waiting for her to emerge. Captain Federico de Soya has been given the Vatican's highest authority, a papal diskey, and is charged with the task of bringing Aenea to the Vatican headquarters in Pacem. At the request of Aenea's uncle, Martin Silenus, Raul Endymion, rescues the child. Raul takes Aenea to an old personal spaceship that no one knows exists, and with the android A. Bettik, they travel to the Parvati System.

In the Parvati System, Aenea threatens to kill herself and her crew. Captain de Soya lets her go. She escapes on a course to Renaissance Vector. The Pax ship Captain de Soya commands can travel faster than any other ship in existence, but the flights are fatal. These deadly trips are no problem for de Soya and his crew.

The Church has discovered and refined the use of a cruciform symbiote to resurrect the dead. Those who have accepted the cruciform are called born-again Christians and are offered near immortality. The cruciform offers nearly unlimited resurrections, but it has limits. DNA from the dead body and at least a portion of the cruciform must be recovered to perform the resurrection. The mechanics of the resurrections are one of the churches most closely guarded secrets.

De Soya arrives at Renaissance Vector long before Aenea's ship can make the journey. This time she convinces the Pax captain to allow her to land her ship on the planet's surface. He agrees, and she takes her ship through the farcaster portal on the River Tethys. This portal has not worked for centuries, and will not work for anyone else. The ship is damaged after the first transition, and must be abandoned. Aenea, Raul, and Bettik continue their journey down the river in a makeshift raft.

De Soya is faced with another failure. The River Tethys is a collection of rivers on over 200 worlds connected by farcaster portals. De Soya must travel randomly to these worlds looking for clues to the girl's destination. Even Aenea does not know her destination. The portals are activated by an unknown entity.

The trio travels to the water planet Mare Infinitus, the abandoned Jewish planet Hebron, the frozen world of Sol Draconi System, the Muslim planet Qom Riyadh, and finally reaches the climax on God's Grove. Rhadamanth Nemes, a product of the evil Core, is waiting on God's Grove to murder Aenea. Captain de Soya was never on a murder mission and destroys Nemes before she can carry out her plan.

When Aenea, Raul and Bettik transition through the final portal, they find themselves on Old Earth.