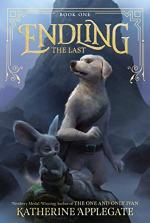 Related Topics
The One and Only Bob

Katherine Applegate
This Study Guide consists of approximately 60 pages of chapter summaries, quotes, character analysis, themes, and more - everything you need to sharpen your knowledge of Endling #1.

The Mirabear Hive is where the novel starts and is described as a large wasp-like nest shaped like a honeycomb. This is where Byx and her family are staying before they decide they are going to the north. Byx also sees butterbats here which later becomes her symbol of hope when she sees one again at the end of the novel. However, this is also where Byx’s family is murdered by the Murdano’s men. Byx herself is dragged away by Khara and thinks of the Mirabear hive (as well as its butterbats) many times throughout the novel.

Costa Di Schola is an island filled with scholars of all races from humans to felivets and raptidons. There are no dairnes on the island as the scholars themselves declare the race extinct. Ferrucci and his student, Luca both live here, and Byx meets...

More summaries and resources for teaching or studying Endling #1: The Last.