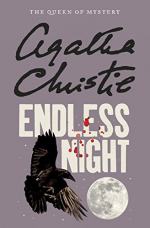 Agatha Christie
This Study Guide consists of approximately 55 pages of chapter summaries, quotes, character analysis, themes, and more - everything you need to sharpen your knowledge of Endless Night.

In Endless Night by Agatha Christie, Mike Rogers serves as the main character and narrator of the novel. Mike was willing to do anything it took to get rich except getting a job and working. When the alluring Greta Anderson suggested an easy way to get rich quickly by marrying millionaire Ellie Guteman and then killing her, he could not resist. Mike realized too late that he could have been happy with Ellie and that he had given himself over to the evil in his own heart.

Mike fell in love with Gypsy’s Acre when he saw an auction flyer for the property. He dreamed of the house he would have. Santonix, a famous architect, worked on the designs for the house, but Mike did not have the money to buy the property or build the house. After he attended the auction, Mike walked to the property where he happened to meet Ellie for the first time. They struck up a friendship and soon Mike learned Ellie was rich. She had been able to sneak away from her protective family with the help of her au pair, Greta Anderson.

Shortly after Mike and Ellie met, Ellie turned twenty-one. At that age, she was considered emancipated from her family. The fortune her grandfather left to her was also converted to her name. Without telling Mike, Ellie purchased Gypsy’s Acre despite a gypsy woman’s plea to Ellie to not have any more to do with the property. When Mike told her that his dream was to have Santonix build a house for him and his wife on Gypsy’s Acre, she told him that she had purchased the property for them. They married in secret.

Neither Mike’s mother nor Ellie’s benefactors were pleased when they learned the two had gotten married. Andrew Lippincott, Ellie’s principal guardian, requested that Mike try to break Ellie’s tie with Greta because he thought the girl was a bad influence on Ellie. Mike refused to let his mother meet Ellie. When Ellie snuck out and met Mike’s mother, she told Ellie she believed Mike did not want them to meet because he was afraid his mother would say something bad about Mike.

Mike and Ellie seemed happy in their marriage until Ellie was killed in an apparent riding accident. People in the area said they had seen the gypsy woman—the same one who had threatened Ellie—in the area at the time it was believed she died. Superstitions about the area claimed a gypsy had put a curse on the land, causing people to have unexplained accidents. An inquest was called to try to determine the cause of Ellie’s death but the gypsy woman, whom people believed was connected with her accident, was found dead in a quarry on the property. Because she was unable to testify, Ellie’s death was ruled accidental.

On his way back from America where Ellie was buried, Mike wrote a letter to Lippincott telling him that he had decided to marry Greta when he got back to Gypsy’s Acre. When Mike arrived, however, he encountered Ellie’s ghost at the same spot where he had first met Ellie. Even though she appeared to be looking for him, Ellie only looked through him. Mike realized she could not see him because he had turned completely evil; he had become endless night. At the house, Mike was overjoyed to find Greta, with whom he had planned Ellie’s death, waiting for him. When he went through the mail, however, he found a newspaper clipping showing him and Greta walking together in Hamburg. Mike knew that Lippincott was aware that he had known Greta before he met Ellie. He believed Lippincott suspected he had killed Ellie. Realizing that he could have been happy with Ellie, Mike killed Greta. He went slowly insane as people began to come to the house and discover what he had done.

More summaries and resources for teaching or studying Endless Night.