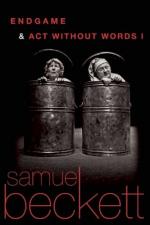 Endgame is Samuel Beckett's second published play. The plot is continuous, unbroken by separate scenes or acts. Roger Blin first produced this play in France at the Royal Court, in 1957, and later Blin and Georges Devine produced it again in an English production. Both were badly received by almost all London critics. Only after the now famous Paris production of 1964, starring Patrick Magee and Jack Macgowran in the roles of Hamm and Clov, was Endgame recognized as a masterpiece.

As the play opens, Hamm is dying in a world that seems to be coming to an end. Hamm takes satisfaction in knowing that all of existence may fade to nothing. Hamm is confined to a chair, and throughout the play he discards, reluctantly, the continuing prospects of life: food; painkillers; his servant Clov, on whom he is totally dependent; the pole that enables him to move his wheelchair; and holding the dog, on which he lavishes his affection.

Hamm's parents, Nagg and Nell, having lost their legs many years ago in a bicycle accident, live in ashbins from which they occasionally emerge only to be cursed by their son. His mother dies and Hamm, knowing that Clov is leaving him, prepares for his last battle, first to outlive his father and then to face inevitable death without the help of the few objects that have given him comfort in his final days. Hamm soliloquizes in terms of the last moves in chess, a king evading checkmate as long as possible with stern asides on religion, "Get out of here and love one another! Lick your neighbor as yourself!" He echoes Pozzo's gravedigger aphorism in Waiting for Godot when he says, "The end is in the beginning and yet you go on." Clov prepares to leave, hating Hamm for past wrongs, yet now without pity for Hamm.