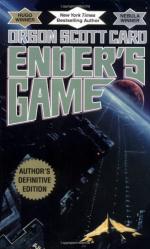 Orson Scott Card
This Study Guide consists of approximately 87 pages of chapter summaries, quotes, character analysis, themes, and more - everything you need to sharpen your knowledge of Ender's Game.

Card's Speaker for the Dead, published by Tor Books in 1986, follows Ender's Game as its sequel. Ender, still dealing with evil and empathy, tries to find a suitable home for the surviving eggs from the queen of the species he destroyed while trying to prevent the extermination of another intelligent race. This novel also won the Nebula and Hugo Awards.

Tor Books published Xenocide, the third novel in Card's Ender series, in 1991. Ender works to save his adopted world from a deadly virus.

The final novel in Card's Ender series, Children of the Mind, finds Ender taking a minor role. Published by Tor Books in 1996, the story revolves around a mission to stop a deadly virus from destroying Earth. Two beings built from Ender's consciousness and memory, named after his brother and sister, play the lead characters.

Ender's Game from Gale. ©2005-2006 Thomson Gale, a part of the Thomson Corporation. All rights reserved.