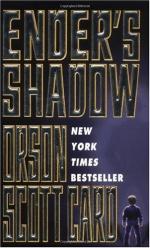 Orson Scott Card
This Study Guide consists of approximately 34 pages of chapter summaries, quotes, character analysis, themes, and more - everything you need to sharpen your knowledge of Ender's Shadow.

This detailed literature summary also contains Topics for Discussion and a Free Quiz on Ender's Shadow by Orson Scott Card.

Ender's Shadow is a futuristic science fiction novel about how children save the human species from destruction by an intelligent alien insect species. It is a parallel novel to an earlier one by the same author, Ender's Game. The same events are portrayed from a different main character to bring out different viewpoints and thematic ideas.

Bean somehow survives the mean streets in Rotterdam and appears to be only two years old, although he has an extremely high level of intelligence. His real name is Julian Delphiki, which he does not learn until near the end of the story. While in Rotterdam, Bean changes the character of the street from survival-of-the-fittest to a more civilized situation in which the older children protect the younger so they can get food from a charity kitchen. The charity kitchen owner tells Sister Carlotta about the change, and she investigates Bean and another older street child named Achilles as possible candidates for Battle School. She selects Bean to attend Battle School for the IF (International Fleet).

Only children attend Battle School, which is located in a space station. Although far smaller than the other children, Bean demonstrates remarkable intelligence. He explores the space station from within its ventilation system. Meanwhile, Sister Carlotta investigates Bean's past. She discovers that he had likely been part of an illegal DNA experiment, and that a minor change to his DNA caused the high intelligence.

Bean advances in Battle School and meets Ender Wiggin, another focal point of the IF. The IF expects Ender to lead an upcoming battle against the Formics, also known as Buggers, a race of insects who live on distant worlds light-years from earth. Earth has already had two battles with the Buggers. The third one will determine whether human beings survive or if the Formics will destroy the human species. However, none of the Battle School students know when this battle will be fought or how they will become a part of it. They perform practice battles among themselves, organized into armies with animal names. Ender commands the Dragon army, in which Bean is placed, and Dragon becomes the highest ranking army in the school due to winning the most battles.

Ender is promoted to Command School, and Bean becomes the commander of the Rabbit army. Shortly thereafter, Bean is sent to Tactical School and then to Command School with Ender, along with nine other students. Command school is in a hollowed-out asteroid that had originally been a Bugger base. Here Ender leads the students in supposedly practice battles. Bean uses his superior intelligence to discover that the practices are actually real battles, fought in real-time with IF starships and fighters light-years away through a special ultra high-speed communication technology.

Bean follows Ender's strategy to a victorious end to the battle, thus saving earth from the Buggers. Sister Carlotta discovers Bean's biological parents in Crete and returns him to his family.

More summaries and resources for teaching or studying Ender's Shadow.