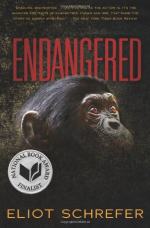 Eliot Schrefer
This Study Guide consists of approximately 49 pages of chapter summaries, quotes, character analysis, themes, and more - everything you need to sharpen your knowledge of Endangered.

This detailed literature summary also contains Quotes and a Free Quiz on Endangered by Eliot Schrefer.

Endangered, written by Eliot Schrefer, is the story of Sophie Biyoya-Ciardulli and her life with her mother in the Congo. Sophie is the child of a white man and a black woman. She spends her early years in the Congo until her father gets a job in Miami, Florida. By then, her mother has devoted herself to creating a sanctuary for bonobos and refuses to leave the Congo. Her parents divorce and Sophie leaves with her father to attend school in America, while her mother continues to work on the sanctuary. Sophie spends summers with her mother.

When she's fourteen, Sophie arrives in the Congo to stay with her mother. She sees a man with a young bonobo ape that is obviously malnourished and is being abused. Sophie rushes to the man and uses the money she has in her pocket to buy the bonobo, later named Otto. When she arrives at the sanctuary, her mother is furious. Sophie's motives in purchasing the bonobo are good but she has inadvertently promoted the bonobo black market. A few days later, the same man shows up with two more bonobo youngsters. Sophie later discovers their bodies and realizes that she's at least partly to blame for their deaths.

At the sanctuary, Sophie struggles to keep Otto alive. He bonds deeply with her and they spend all their time together. Her mother goes to a remote region of the country to release several bonobos just a few days before Sophie is due to leave for Miami. After her mother's departure, war breaks out. Sophie is cut off from news for awhile but then learns that she'll have a window of opportunity to leave the country. She plans to go but changes her mind when Otto runs after the van. She hides in the large bonobo enclosure, locking herself in with the electric fence.

When the military arrives at the sanctuary, many of the workers are murdered. Sophie spends weeks inside the enclosure, hiding and living among the bonobos. When she discovers that the electric fence no longer works, she knows she'll have to take Otto and leave. She hates leaving the other bonobos, knowing the soldiers will hunt them down and kill them, but doesn't know what else to do. She slips out but another youngster follows, followed by several of the adults. She has a close encounter with a soldier but manages to escape.

She plans to make her way to the nearby city of Kinshasa but has to drug the other youngster in the bonobo group in order to get away with only Otto. She finds the city in chaos and decides she'll go north to find her mother. She sets out on a very dangerous journey which includes a trip up a river with a native man. When Otto is captured in a snare, she has to venture into a dangerous military stronghold to rescue him.

After months of hiding and traveling, she finds herself in a small village where a kind woman provides food and a safe place to rest. She discovers that her mother is in the same village, recovering from a bout of malaria. They spend the coming weeks there, resting, recuperating, and waiting for the fighting to stop. When they arrive back in Kinshasa, they find that the sanctuary is basically intact but almost all the bonobos are gone. Sophie's mother is determined to rebuild and sets about the duties toward achieving that. They soon discover that most of the bonobos are actually safe, living on the property that belongs to the country's president.

Sophie remains in the Congo with her mother where she finishes school and spends a great deal of time with Otto. She then goes away to college and returns after graduation with plans to help build a stronger economy in the country. She visits the remote bonobo preserve with her mother and spends a little time with Otto, discovering that Otto is accompanied by a female and a youngster.

More summaries and resources for teaching or studying Endangered.