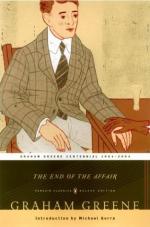 The End of the Affair Summary & Study Guide

The End of the Affair Summary & Study Guide Description

The End of the Affair Summary & Study Guide includes comprehensive information and analysis to help you understand the book. This study guide contains the following sections:

This detailed literature summary also contains Topics for Discussion on The End of the Affair by Graham Greene.

The End of the Affair is narrated by Bendrix, a lame man who is a writer and who has had an affair with a married woman, Sarah Miles. The end of the affair filled him with bitterness, and when he sees his lover’s husband by chance, he rekindles the affair and spies on Sarah through a private detective who brings him letters and her journal. The journal reveals Sarah had left Bendrix on account of a budding Catholicism: she was beginning to feel the need to believe in God, even in spite of her lifelong disbelief. When Bendrix reads the real reason for Sarah’s termination of the affair, he hurries to her, but she rushes out, and takes refuge in a church. The excursion costs her her life, though: she has had a bad chest cold, and it turns fatal. The novel does not end there however: there is still the question of Sarah’s funeral to answer—Bendrix prevails upon Henry to have her cremated instead of buried in a Catholic ceremony—and there is also the question of Bendrix’ own faith. Diligently he holds to his faith in a world of coincidences, science and decisions, as everyone around him, Sarah included, wants to see the world as evidence of divine will.

The novel takes place partly in 1944, when Bendrix and Sarah were having their affair, and partly in 1946, when Sarah swings back into Bendrix’ life. The affair ended badly for Bendrix: Sarah simply walked out on him after a V1 bomb blew up the front of the house where they were, making love. Sarah prayed Bendrix might survive, and when he appeared in front of her, bloody but living, she felt bound by a vow to God. If Bendrix and Sarah were young, she might have made this leap of faith into marriage, but she is already married, and Bendrix is jealous and somewhat destructive. He wants a love that will go on and on, and she knows she cannot give it to him, on account of her prior marriage vow. So she makes the leap into religion and dies before Bendrix can try to convince her to run away with him.

Bendrix spends much of the novel puzzling out her struggle between faith and doubt. He himself has been lame since a childhood illness, and whether or not this is the ultimate cause, he is also diabolical and experienced and jaded in a way other characters are not. He does not mind hurting people in order to assert his superiority over them, even if he is English and only asserts it to himself. So he has a certain derisive scorn for Henry’s complacent civil servant competence, and also for Richard Smythe’s anti-religious zeal, and especially for Father Crompton’s smug, peaceful acceptance. He even has some contempt for Sarah’s own mother, who superstitiously believes in the value of the secret baptism she gave Sarah when Sarah was two years old.

Each of these people has their personal choice for Sarah’s funeral, and Bendrix suspects each of their motives. He alone, he believes, loves Sarah for who she is, and he alone, the novel would have the reader believe, was capable of sharing a living, responsive, mutual and fulfilling love with her. Everyone around him wants to believe in miracles and God—except Henry, who is too drab and functional to have any passion or belief—so Henry is isolating himself by writing his story of Sarah. Ultimately the story itself is his company, at the same time as it is his act of devotion to a Sarah who does not exist—the Sarah he continues to love—as opposed to the others’ acts of devotion to a God they seem to believe does exist.

The End of the Affair from BookRags. (c)2022 BookRags, Inc. All rights reserved.