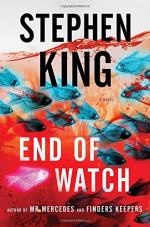 Related Topics
Bag of Bones
Black House: A Novel
Carrie
Cujo
Cycle of the Werewolf
Desperation
Different Seasons
Dolores Claiborne
Four Past Midnight
Gerald's Game
It
Misery
Nightmares & Dreamscapes
Night Shift
On Writing: A Memoir of the Craft
Pet Sematary
Roadwork
Salem's Lot
Skeleton Crew
The Dark Tower VI: Song of Susannah
Stephen King
The Dark Tower: The Wind Through the Keyhole
The Dark Tower Series
The Dark Tower VII: The Dark Tower
The Dead Zone
The Dark Tower II: The Drawing of the Three
The Eyes of the Dragon
The Girl Who Loved Tom Gordon
The Green Mile
The Dark Tower: The Gunslinger
The Long Walk
The Regulators
The Shining
The Talisman (King and Straub novel)
The Waste Lands
Wizard and Glass
Wolves of the Calla
Joyland
Mr. Mercedes
Finders Keepers
Gwendy's Button Box
The Outsider: A Novel
Doctor Sleep
The Institute
If It Bleeds
Full Dark, No Stars
Later
Hearts in Atlantis
Everythings Eventual

This novel is told from the point of view of a third person omniscient narrator. Main characters of focus are Brady and Hodges but the author often focuses on no character in particular, allowing the reader to know the thoughts and actions of all characters involved. By using the third person point of view, King is able to tell his story from all angles. The reader gets input from Brady as well as from Hodges. If the story were told from a first person point of view not only would the reader not know what was going on in all of the characters minds, he would also get attached to one character. By letting an omniscient narrator tell the story, it remains plot driven instead of having the reader get too attached to any one character.