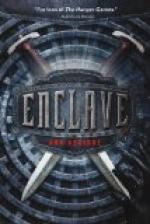 Ann Aguirre
This Study Guide consists of approximately 24 pages of chapter summaries, quotes, character analysis, themes, and more - everything you need to sharpen your knowledge of Enclave.

Deuce is the main character of the novel. Deuce is a teenage girl, probably somewhere around thirteen years old, who lives in an enclave in the subway tunnels underneath New York City. She has always lived in the enclave and believes that it is not habitable to live topside. There are strict rules in the enclave that Deuce has no reason to question.

As the novel opens, Deuce reaches the age at which all members of the enclave are given a name and allowed to become a working member of the enclave. Deuce has chosen to become a huntress even though some think she should be a breeder like her mother. Deuce works hard to prove herself, but is unhappy when she is partnered with Fade, an outsider in the enclave.

Deuce and Fade find a little boy in the tunnels one day who tells a story of...

More summaries and resources for teaching or studying Enclave.

Enclave from Gale. ©2005-2006 Thomson Gale, a part of the Thomson Corporation. All rights reserved.