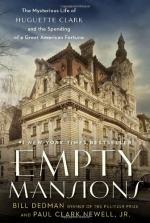 Discuss the scandal that ended W.A. Clark's first term in the U.S. Senate. What were the accusations against Clark? Who was his accuser? What did the investigation find? How did Clark defend himself? Which actions of Clark might suggest that he was guilty of the accusations? How did this scandal affect the rest of Clark's life?

Discuss W.A. Clark's rise to wealth. How did Clark initially make his money? What were his first businesses? What obstacles did Clark face in building his businesses? Why did Clark put his life on hold in the 1870s to go back to school? What does this say about Clark's personality?

Discuss the contributions Clark made to American culture. What is Clarksdale? What is significant about its origins? Who sold parcels of land around Las Vegas? Why? Why did Clark...