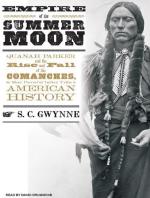 Empire of the Summer Moon: Quanah Parker and the Rise and Fall of the Comanches, the Most Powerful Indian Tribe in American History Summary & Study Guide

S. C. Gwynne
This Study Guide consists of approximately 24 pages of chapter summaries, quotes, character analysis, themes, and more - everything you need to sharpen your knowledge of Empire of the Summer Moon.

Empire of the Summer Moon: Quanah Parker and the Rise and Fall of the Comanches, the Most Powerful Indian Tribe in American History Summary & Study Guide Description

Empire of the Summer Moon: Quanah Parker and the Rise and Fall of the Comanches, the Most Powerful Indian Tribe in American History Summary & Study Guide includes comprehensive information and analysis to help you understand the book. This study guide contains the following sections:

This detailed literature summary also contains Topics for Discussion on Empire of the Summer Moon: Quanah Parker and the Rise and Fall of the Comanches, the Most Powerful Indian Tribe in American History by S. C. Gwynne.

Cynthia Ann Parker and her family lived in the frontier of Texas in the early 1800s when Indian problems were plaguing the settlers. The Parker men were well aware of the dangers and should have known they were putting their families in danger. There were some who said the Parker family was so afraid of God that they had no room to fear anything else, such as Indians. When a small band of Indians arrived at the Parker fort one day, the family was caught completely off guard. One of Cynthia's uncles went out to meet the Indians and was killed. Cynthia, her mother and three siblings ran only a short distance before they were caught. Cynthia's mother was forced to give up two of her children. Cynthia and her brother were taken along with two adult aunts and a young cousin.

Cynthia was soon adopted into the tribe and treated as a full member. Her uncle continued to look for her for several years. A white soldier encountered Cynthia and offered a sizable ransom for her return but was refused. It was much later revealed that Cynthia married and her husband kept her hidden whenever there were white visitors in the camp.

Cynthia married an important leader named Peta Nocona and had three children. The oldest, Quanah, was twelve when the Indian camp was attacked. Peta Nocona was killed thought Quanah refused to admit it for many years. Cynthia was separated from her two sons and the white soldiers captured her. She was carrying her infant daughter and revealed herself as a white woman to keep from being killed. Cynthia hated living in the white man's world and moved in with several family members before finally finding a niche and beginning to settle in. However, her young daughter died and Cynthia was devastated by her death.

There were dozens of battles between Indians and whites over the years of Quanah's life. In many cases, the Indians attacked and the whites sought the bands responsible in an effort to exact retribution. The military underwent dramatic changes over the years with the earliest conflicts ending in the slaughter of whites who didn't understand the Indian method of fighting.

Meanwhile, Quanah was taken in by another tribe but was treated cruelly because he was an orphan and was half-white. He made war on whites for years but abruptly changed his position and urged peace. Quanah moved onto the reservation and embraced the white man's ways. He had a telephone and a car. He had a railroad named for him and often traveled on the train. He lobbied for what he believed to be right, including a school district for Indian children. He built a large home for his extended family. He was generous and his home was filled with guests. He died in 1911 of heart failure.

More summaries and resources for teaching or studying Empire of the Summer Moon: Quanah Parker and the Rise and Fall of the Comanches, the Most Powerful Indian Tribe in American History.

Empire of the Summer Moon: Quanah Parker and the Rise and Fall of the Comanches, the Most Powerful Indian Tribe in American History from BookRags. (c)2022 BookRags, Inc. All rights reserved.