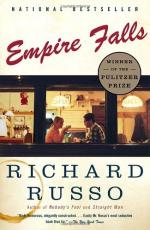 Richard Russo
This Study Guide consists of approximately 85 pages of chapter summaries, quotes, character analysis, themes, and more - everything you need to sharpen your knowledge of Empire Falls.

This detailed literature summary also contains Topics for Discussion and a Free Quiz on Empire Falls by Richard Russo.

It is sometimes difficult to tell if Richard Russo's intent with Empire Falls is to describe the human condition in a story about the fate of a small town in Maine or to describe a small Maine town in a story about the human condition. In any event, Empire Falls is a once-prosperous industrial town ruled by four generations of the wealthy Whiting family. Empire Falls has fallen victim to a cheap international labor market with greed on both sides of the labor-negotiating table. Miles Roby, the central contemporary character, is the manager of the Empire Grill with his brother David. Miles has worked at the diner since he was in high school. David is a recovering alcoholic who sobered up after crashing his truck destroying one of his arms and rendering it useless. Mrs. Whiting, the widow of C.B. Whiting, has been uncharacteristically generous with Miles, promising to transfer ownership of the grill to him after her death with the condition that he will continue to manage it until then. Tick, Miles' teenaged daughter, also works at the diner. Miles is wholly devoted to her. Janine is Miles'estranged wife who has promised to marry Walt Comeau. Walt, known as The Silver Fox, is an aging wannabe playboy who owns the local health club. Walt is a braggart who loves to rub salt in Miles wounds about Janine. Janine is a former middle-aged fat middle-aged lady who discovered the tortures of the Stairmaster at Walt's club. Now that Janine has developed a knockout body, she has found the joy of sexual fulfillment in Walt's bed. Janine joins Walt in the torment of her husband with no end of sarcasm about his lack of sexual prowess. The novel is a snapshot in the life of Empire Falls and its fascinating tableau of characters. Everyone is waiting for Mrs. Whiting to die to see where she leaves her fortune

There is not a single plot in Empire Falls, but many little sub-plots. Tick is the on-again off-again girlfriend of Zack Minty. Zack is the son of Jimmy Minty, Miles' nemesis and contemporary. Jimmy is a police officer aspiring to the Chief's job. Like his father, Zack is not very bright but is kind of a low-life who is following his father's example as a sort of enforcer for the Whitings. For some reason that Miles does not understand at first, Mrs. Whiting has had a special interest in Zack and his mother, Grace since Zack was a child. Miles' father Max., an itinerate house painter, is also a low-life. Max appreciates neither Grace's stunning physical beauty nor her loving nature. When Miles was nine-years-old and his father was in jail for being a public nuisance, Miles and his mother took a vacation on Martha's Vineyard where she met a man named Charlie Mayne. Although they were quite discreet, Miles figured out that his mother and Charlie were having an affair. Charlie Mayne was everything his father was not. Charlie was sophisticated, rich, and powerful driving around in his yellow sports car. Jealous of the attention his mother paid to Charlie and excited at the neat thing he learned and did with Charlie; Miles developed a love/hate relationship with him. Many years later, Miles discovered Mr. Mayne was actually C.B. Whiting. The special attention he and his mother received from Mrs. Whiting was all about vengeance rather than genuine concern. The Whitings also had a daughter named Cindy who was born in the same hospital and on the same day as Miles. Cindy has been in love with Miles since childhood. Crippled as a small child when she was ran over by a car, Cindy is an outcast. In the end it is revealed that Cindy was not ran over by a mysterious green Pontiac but by her own father, C.B., who was running from a fight with his wife.

Amidst the many other characters in Empire Falls is John Voss. John is a silent, troubled boy who is in Tick's art class at Empire Falls High School. Forced into a friendship with John, Tick gets him a job at the Empire Grill. John is the sort of boy who invites abuse from his peers. It is ultimately revealed that he has been badly abused by adults as well. John's story culminates in a schoolroom massacre after discovering that the boy carried his grandmother's body out to a landfill and left it there when she died. Unbeknownst to officials and peers, John has been living alone in his grandmother's house.

More summaries and resources for teaching or studying Empire Falls.