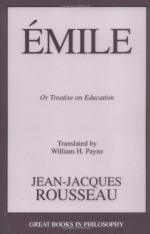 This detailed literature summary also contains Topics for Discussion and a Free Quiz on Emile by Jean-Jacques Rousseau.

Jean-Jacques Rousseau is now famous as a thinker and writer. His beginnings and his life were fairly humble despite the impression that his present level of prestige might suggest. He was exposed to people of a variety of social classes. Unlike some, it is evident from his need to defend intellectual pursuits and his criticism of them that he spent much time around what are now called "the working classes." The wish for physical activity and the demands of the sedentary lifestyle are actually addressed.

This work is a treatise on education out of the European tradition. The author was a nonconformist to some degree, a fact which influenced his life greatly. He was known to not have been monogamous. He did maintain long-term, stable relationships, at least one that was not a marriage and another that was one. Rousseau suffered persecution but his sexual behavior was not the sole cause of this, his political and perhaps religious ideas being a greater source of trouble.

The book covers a twenty-five year span of time that takes a fictional model babe named Emile into adulthood. When Rousseau writes of "education" he means this in the most complete sense. The work is sweeping in this respect. The man begins with protestations against the use of swaddling clothes, and ends it with the joy that Emile, who is now going to be a father, is going to voluntarily come to him for advice just as his wife with confer with her mother now that she is going to be a married mother.

The author covers much. Despite this, present day readers will not be likely to see why this work was a source of such trouble when it came out in France, leading to Rousseau being actively persecuted and pursued by the law.