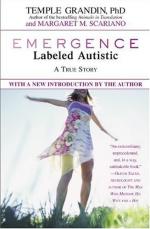 Temple Grandin
This Study Guide consists of approximately 37 pages of chapter summaries, quotes, character analysis, themes, and more - everything you need to sharpen your knowledge of Emergence.

This detailed literature summary also contains Topics for Discussion and a Free Quiz on Emergence: Labeled Autistic by Temple Grandin.

This book has a straightforward, autobiographical plot structure. It begins with a few chapters about the author remembering what it was like to grow up as an autistic child, right up through high school at a boarding school. The next few chapters use the images and symbols that are important to the author as she transcends the challenges of autism and uses them to her advantage. The final chapter makes some important observations about autism and how to help children who are autistic. There are three helpful appendices, as well.

This is probably one of the most unique books in the world, because typically autistic people never emerge from their handicap in order to communicate. However, as the story tells us, Temple is not usual in the world of autistics. Usually they do not learn to speak, much less to write, coherently, and often their words and phrases have meaning only for themselves. Autistics are difficult to be around as they can be unpredictable, violent, destructive, and in Temple's own word, just "weird." It is a frightening ailment, described rather dispassionately by Temple herself. She knows even as an autistic child that she is not behaving like others, that she is misbehaving, and that she cannot help herself. At times, however, she actually chooses bizarre behavior for attention seeking. Differentiating between the two strange sets of behavior is easy for the girl Temple, and soon it becomes rather easy for Temple's mother.

This is a testament to the loving, attentive care of a parent who can see into the heart and mind of her child, even when the child possesses the strange and hard-to-deal with behaviors of an autistic. Temple does not even start to talk until after age three, and then only minimally. Mostly she just screams to get what she wants, and one can imagine how hard this is for a parent to deal with. In reality, Temple's dad finally gives up and thinks that Temple should be institutionalized. Temple's parents eventually divorce. One wonders if this disparity in the treatment of their daughter has something to do with it. Surely having an autistic child in the house is a terrible burden on everyone in the family.

Temple also describes significant teachers in her life. Her first primary teacher does not understand her, and Temple relates how difficult it is to do linear kinds of learning, as in multiple choice questions that only have one answer, when Temple can clearly see several ways to answer questions. It is easy to extrapolate that a child need not be autistic to struggle with such issues. Indeed, throughout the book, the reader can easily extrapolate how Temple's problems, when looked at more minimally, can be problems shared by many people. Temple makes this connection herself, noting that although she possesses truly bizarre behaviors, many of her attitudes, fixations, and kinesthetic and visual propensities are shared by many people in lesser degrees. By inference one can see that the educational system in most schools ignores and even punishes such propensities.

Temple has the good fortune of being in a family with the means that allow her to go to special small schools and be treated by psychiatrists throughout her growing-up years. True, many of the psychiatrists do not particularly understand her. Her primary psychiatrist, Dr. Stein, supplies M & M's to Temple but seems to offer little else, especially from the child's point of view. When Temple goes to a summer camp and is prematurely introduced to sexual matters on which she fixates but does not really understand, Dr. Stein latches right onto these things and attaches them to the most important thing in Temple's life, The Squeeze Machine.

The Squeeze Machine is a fixation and obsession from the time Temple is small. To understand its importance, one must understand that autistic children and autistic people absolutely cannot tolerate being touched. Babies stiffen up and turn away from their mothers. Young children become violent when touched. Parents and family understandably are hurt and put off by these rejections. However, Temple develops throughout the book the idea that the children really crave to be held, to be touched and cuddled, but their neurological affliction makes it impossible. Using a firm, gentle pressure as being held in Temple's invention, the Squeeze Machine, modeled on a cattle chute that Temple sees and experiments with as a senior in high school, the neurological disconnections, the vestibular mechanisms in the body, can be calmed and perhaps reset so that autistics can tolerate touch. The same operation renders the autistic more liable to be able to experience emotions, and this is a real difference because autistics may be excited and interested in machinery but not in people. They do not feel, and they do not love.

Temple is fearful of her machine because of this and because Dr. Stein, who is firmly grounded in Freudian theory, and others, insist that the Squeeze Machine is something negatively sexual. Temple does not really understand much about sexuality, yet she is deeply troubled by the suggestion that her machine may be some kind of sexual device. These doubts trouble Temple throughout her life, even though her Squeeze Machine and later her devices to help with animal husbandry become so famous that she travels internationally.

Those who have known autistics will be thrilled and surprised to find out that Temple learns to speak articulately and expressively, overcoming much of the flatness and inappropriate loudness typical to autistics. It is fascinating to watch Temple overcome her neurological condition, using research and logic to reason herself through crises. The book is fascinating not only as an inner view of an autistic, but a testimonial to the caring of family and friends and teachers.