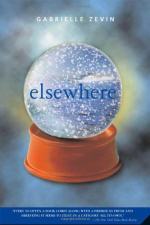 "For Lizzie's sake, Lucy wants to believe that the end was quick and painless, a quick end is a good end" (Prologue: In the End, p. 6).

"Elizabeth Hall wakes in a strange bed in a strange room with the strange feeling that her sheets are trying to smother her" (Part 1, The Nile: At Sea, p. 11).

"All at once, Liz needs to get there. She sense that when she reaches the Observation Deck, something definitive will happen" (Part 1, The Nile: In Memory of Elizabeth Marie Hall, p. 25).

"'Out my window, you'll see a library built by Frank Lloyd Wright. People who know these things say it's better than any of the buildings he built on Earth" (Part 2, The Book of the Dead: A Long Drive Home, p. 37).

"How long does it take to say goodbye to everything and everyone you've ever known?" (Part 2, The Book of the Dead: Sightseeing...