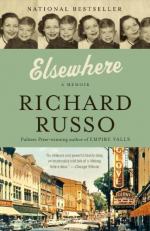 Richard Russo
This Study Guide consists of approximately 54 pages of chapter summaries, quotes, character analysis, themes, and more - everything you need to sharpen your knowledge of Elsewhere.

NOTE: All citations in this Study Guide refer to the Kindle version of Elsewhere: A Memoir, published Oct. 30, 2012.

Elsewhere is a memoir by Pulitzer Prize-winning novelist, short story writer, and screenwriter Richard Russo. Focusing on his high-strung mother and her quest for escape from her deteriorating hometown of Gloversville, New York, Russo explores themes of independence, mental illness, guilt, and family in Elsewhere.

More than anything else, Richard Russo’s mother wanted him to find a life for himself outside of their hometown of Gloversville, New York. She strove to find an identity for herself outside the small town but never completely escaped the hold her home had on her. In his memoir, Russo discusses the impact his mother had on his life with the unbalanced combination of her emotional neediness and desire for independence.

Russo begins his book by describing a recurring dream he had about his mother in which he had carried her endlessly through a network of unfamiliar streets. He had the dream frequently in the months between his mother’s death and the time the family scattered her ashes in Menemsha Pond on Martha’s Vineyard.

After this description, Russo’s story moves backward in time to his boyhood when he and his mother, Jean, lived in an upstairs flat in the home of Jean’s parents. Even though she was dependent on her parents, Jean tried to put forth the image that she was independent because she had a job, paid her rent and bought her clothes. She was a good mother who took an interest in Russo’s schooling and made a point to keep in contact with his teachers. No one was more surprised than Russo when he decided to go to college in Arizona and his mother announced she was going with him. She wanted to break out of the cage in which she felt she had been forced to live in while in Gloversville.

Although their trip to Arizona was one that seemed as if it should fail — they had an old car, not enough money, and Russo was an inexperienced driver — the two made the journey. Jean had only one major meltdown in Arizona when she learned the GE facility where she had thought she could get a job was not hiring. After that she found a job elsewhere, rented an apartment, and even learned to drive. Russo began college believing that he and his mother’s paths in life were diverging.

That was not to be the case because shortly after they were married, Russo and his new wife, Barbara, took Jean in when she discovered she could no longer live with her parents. She had moved back home after a failed marriage with the cover that she was doing so to help her mother. For the rest of Jean’s life, Russo and Barbara struggled to support Jean, who was emotionally dependent on Russo. They found suitable apartments near where they lived, even when Jean’s list of requirements for an apartment seemed impossible. Several moves occurred, some because Jean decided she could not stand the place she had decided to live and some because of Russo’s job took their toll on Jean. She seemed to become more stressed and panicky each time they moved. Jean was finally diagnosed with congestive heart failure. Her last year was stressful for Russo because he struggled to keep his mother cared for even though she fought against the home health care workers.

It was after Jean died that Kate, Russo’s daughter, began to recognize that certain sounds drove her crazy. She was diagnosed as having obsessive compulsive disorder. When Russo read a book about the disorder, he recognized his mother in the symptoms that were described. For years the family had talked about Jean’s condition, which they defined as “nerves.” Russo’s father had gone so far as to tell Russo his mother was crazy. When Russo realized his mother had suffered from a real disorder that could have been treated, he felt guilty and frustrated with himself because he had never thought to try anything different when it came to his mother’s treatment. He had allowed her to govern the way he dealt with her.

In connection with trying to find closure after his mother’s death, Russo also describes his struggle of coming to terms with the downfall of Gloversville. The town had depended on a tannery to employ its people and support its businesses. The tannery had polluted and poisoned the river and had caused the deaths of many workers because of unsafe chemicals and working conditions. Although his mother had a fantasy belief that Gloversville was where she had been happiest, she also believed the town had gotten what it deserved. Russo discovered that he agreed with her.

More summaries and resources for teaching or studying Elsewhere (Russo).