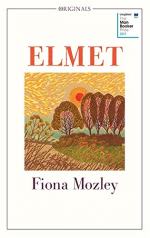 Mozley, Fiona
This Study Guide consists of approximately 60 pages of chapter summaries, quotes, character analysis, themes, and more - everything you need to sharpen your knowledge of Elmet.

This detailed literature summary also contains Quotes and a Free Quiz on Elmet by Mozley, Fiona .

The following version of this book was used to create this study guide: Mozley, Fiona. Elmet. Algonquin Books of Chapel Hill, 2017.

Daniel narrates memories of his house in Elmet, a small woodland area in Yorkshire, and the events that lead to the catastrophic dissolution of his family. He searches for his missing sister Cathy along train tracks, knowing that she may never be found. Throughout the novel, Daniel remembers his former idyllic life in the woods where he lives with his sister Cathy and their father, John, in a house they build for themselves. One day a cruel landowner, Mr Price, pays them a visit and threatens to evict them if their father, affectionately referred to as Daddy, does not work for him as he once did. Daddy refuses to work for Mr Price and does not believe that paperwork could grant any man ownership over a living breathing land. His convictions set him on a mission to unify the village against landlords who intimidate their tenants. While his efforts are fruitful, Mr Price is determined to assault Daniel's family. Daniel and his sister Cathy must face challenges and accusations against them, and their innocence is ravished. Mr Price accuses John of murdering his son, Charlie Price, and reaps destruction on his family and house in the copse. The novel centers on the family's relationship to the land, their political struggle against an unjust system, and loyalty to one another.

The first chapters describe the reasons that lead the family to leave their life in the village and move into the woods. Daddy works as a bare-knuckle boxer in prize fights and makes money from bets. He is also employed at times to beat up people who owe money. Cathy wants to join the boy's football games, but they reject and tease her. One day, a group of boys restrain Daniel and one of them assaults Cathy and grabs her breast. The school accuses Cathy of initiating the violence and she is unlikely to be believed were she to tell the truth. She is frustrated and pained by the reality of the world, and knows that she cannot win. After Granny Morley dies, Daddy thinks it is best to protect his children by bringing them to live in the woods, separate from the village's cruel realities.

Daddy builds a house in the woods and teaches Daniel and Cathy to work with their hands and use the materials that the woods provide. During the day, the siblings go to Vivien's house, an old friend of Daddy's who educates them informally. One day, they are visited by Mr Price, a landowner who threatens to evict the family if Daddy does not work for him. Because Daddy is the strongest man in the village, Mr Price wants Daddy to work for him again as a bailiff to intimidate other tenants. Daddy refuses and seeks to unify the village to form an organized effort against cruel landlords. With the help from Peter and former union members Ewart and Martha, they celebrate a bonfire to unify local laborers and start a renter's strike. The laborers refuse to pay rent until they are paid fair wages and their rights as tenants are observed. Although they achieve an early victory, the landowners send bailiffs to intimidate them and eventually hire other laborers. Daddy fights against the bailiffs and ensures peace in the village.

Eventually, Mr Price strikes a deal with Daddy. If Daddy fights for him in a match against the Bear and wins, he will grant him the deed to his land and meet the demands of the strikers. Daddy accepts the challenge and wins the match, guaranteeing his ownership of the land and ending the strike. However, on the evening of the match, Charlie Price, Mr Price's son, is found strangled in the woods adjacent the racecourse where the match was held. Mr Price accuses Daddy of murdering his son and seeks to destroy him and his family. Daddy disappears momentarily and his children stay behind in their house, but are kidnapped by Mr Price's men. Cathy reveals that she is the one who murdered Charlie Price, but no one believes her. Cathy kills Charlie Price because he and his brother Tom had been accosting her while she went off into the woods during Vivien's teaching sessions. She thinks that if she does not kill Charlie, he would continue to assault her and she would be not be physically strong enough to fend him off.

In the final chapters, the siblings and Daddy are assaulted and tortured by Mr Price's men in their house in the copse. Daddy is bloodied and tied to a wooden board and Cathy is stripped naked. Mr Price commands one of his men to rape her in an adjacent room. Cathy emerges from the room after murdering her would-be rapist, with blood up her arms and holding a bucket with oil, a torch, and a shotgun. She shoots men who challenge her ability to use the gun, and then burns down the house with everyone inside. Daniel escapes the house and is found unconscious in a field by Vivien on horse. Vivien tells him that she saw a figure emerge from the house and, believing it could be Cathy, Daniel rushes to the train tracks to try to find her. He becomes a wanderer, seeking his sister for several years in the city, without the promise that she will ever be found.

More summaries and resources for teaching or studying Elmet.