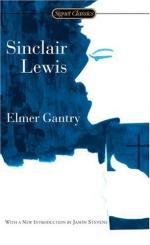 Discuss the issue of creationism and evolution. Should creationism be taught in public schools? Is there really a conflict between science and religion, between reason and faith, or can the two live in harmony?

Watch the 1960 film version of Elmer Gantry. Is Elmer the same in the movie as he is in the novel, or have the filmmakers altered his character? What are the major differences between the film and the novel?

Write a brief character sketch of Frank Shallard and describe his role in the novel. Why does Lewis include him in the book?

Consider the character of Jim Lefferts, as revealed in the first three chapters. What sort of a man is Jim? What are his leading characteristics? Then read chapter 30, section 5, where Jim reappears. How would you describe his demeanor? Is he successful? Which man seems to have the...