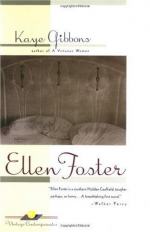 Kaye Gibbons
This Study Guide consists of approximately 69 pages of chapter summaries, quotes, character analysis, themes, and more - everything you need to sharpen your knowledge of Ellen Foster.

When Kaye Gibbons published Ellen Foster in 1987, the novel-her first-met with an enthusiastic audience. Critics admired Gibbons's skillful creation of Ellen's narrative voice, acknowledging its accuracy in representing a child's point of view. Gibbons won two literary awards for Ellen Foster, the Sue Kaufman Prize for First Fiction and a citation from the Ernest Hemingway Foundation. While some readers criticized the events of the novel as being melodramatic, others asserted that Ellen's wisdom, resilience, and tenacity save her narrative from becoming a sentimental tearjerker. Gibbons has said that some of the events of the novel-Ellen mother's suicide and Ellen's subsequent movement from one relative's home to another-reflect her own childhood experiences. Ellen is indeed a lonely child, quietly observing the happiness of other families, yearning to belong, and making mental notes about what her perfect family should be like. Ellen Foster is ultimately a coming-of-age story, as Ellen engineers for herself a place in the secure, nurturing family she has craved and simultaneously comes to understand herself better through her friendship with Starletta, her black friend. Against the Southern backdrop of racism, Ellen moves from feeling she is superior to Starletta into a new understanding that color has nothing to do with a person's character. Ellen Foster belongs not only to the Southern tradition in American literature, with its distinctive voice and its treatment of racism, but also to that of first-person coming-of-age narratives, in which the narrator's innocence is also his or her wisdom.

More summaries and resources for teaching or studying Ellen Foster.

Ellen Foster from Gale. ©2005-2006 Thomson Gale, a part of the Thomson Corporation. All rights reserved.