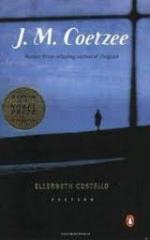 This Study Guide consists of approximately 43 pages of chapter summaries, quotes, character analysis, themes, and more - everything you need to sharpen your knowledge of Elizabeth Costello.

This detailed literature summary also contains Quotes and a Free Quiz on Elizabeth Costello by .

Elizabeth Costello is a novel about an Australian author who has achieved some fame from her writing. Twice divorced and the mother of two children, she is dedicated to her life as a writer. As the novel opens, Elizabeth is set to receive a major literary award with a substantial cash prize. Her son John assists her through her travels. During the ceremony, Elizabeth gives a speech on Kafka’s story about an ape speaking to a room of academics. The crowd is unsure of her speech at its end. Nevertheless, they applaud.

Elizabeth is later invited to join a cruise ship and give a lecture on the contemporary novel. While she is on board, she encounters a former lover, an African writer named Emmanuel Ergudu. He, too, is lecturing on the ship. He discusses African writers and their difficulty in reaching an audience in the Western world. Elizabeth challenges Ergudu’s position that he needs to reach audiences outside of Africa. She notes that writers write for their respective audience, be they English, Russian, or American.

When Elizabeth is invited to another speaking engagement, she shocks her audience by comparing animal slaughter to the Holocaust. She later has a somewhat better experience when she discusses how animals are viewed through the lens of poets. She tries to make sense of her understanding of the topic, finding herself confused by her own opinion at times.

After twelve years, Elizabeth goes to visit her sister Blanche who is a nun living in Africa. They spar during her visit, both questioning the belief system of the other. Blanche rejects the academic world, especially the humanities, in favor of the Church. Elizabeth defends the humanities and the Ancient Greeks. The sisters part ways at a stalemate. However, when Elizabeth returns to Australia, she cannot leave the conversation with her sister alone. She writes to Blanche to tell her that she is wrong about the humanities and what the humanities can teach people. After sending the letter to her sister, she remembers more about the story she detailed about sitting for an old man who was a painter. She remembers posing for him partially nude and later going to visit him in a nursing home and sitting at his side partially nude.

Elizabeth is later invited to speak at a conference on the problem of evil. She prepares her lecture, citing the work of Paul West, who has written about the executions of the men who would have assassinated Hitler. She objects to his work and how he invited the darkness of the subject matter into his life. When she learns that Paul West will be speaking at the same conference, she considers citing different material. Instead, she confronts Paul West and tells him that she will be speaking about his book. She is reminded of a time in her life when she first encountered evil herself, when a man savagely beat her and set her clothes on fire.

After contemplating the nature of immortals and their dalliances with mortals, Elizabeth ventures into a type of purgatory where she must defend her belief system in order to pass through the gate. Since she does not know what she believes, she is sent to stay in a dormitory where she can spend time preparing her statement. Her first appearance is a hearing. It is a failure, and she must try again. The novel concludes before Elizabeth learns the result of her second hearing.

More summaries and resources for teaching or studying Elizabeth Costello.