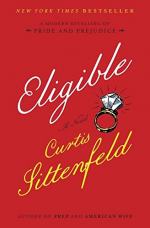 This detailed literature summary also contains Quotes and a Free Quiz on Eligible by Curtis Sittenfeld .

In Curtis Smittenfeld’s modern retelling of Pride and Prejudice by Jane Austen, the five Bennet sisters lived with their mother and father in their family home in Cincinnati. Mary, Kitty, and Lydia, the youngest sisters, all lived there permanently, despite being in their twenties. The eldest two, Liz and Jane, 38 and 39 respectively, returned home from New York for the summer in order to care for their father, Mr. Bennet, who suffered a heart attack.

Chip Bingley, a doctor and a former contestant on a Bachelor style TV show called Eligible recently had moved to Cincinnati. Mrs. Bennet, keen for her daughters to get married, arranged for her daughters to meet him at a barbecue. At the barbecue, Liz overheard Chip talking to his friend Fitzwilliam Darcy. Darcy was very rude and dismissive about Cincinnati and Liz spread his comments to everyone else at the barbecue after making it clear to Darcy that she’d overheard him. Chip then asked Jane out on a date.

Liz discovered that Mr. Bennet, her father, was uninsured and his recent medical treatment had left him in so much debt that the family would have to sell their house. Liz arranged for Mary and Kitty to rent an apartment together and Lydia decided to move in with her boyfriend Ham.

Before she met Chip, Jane had been trying to get pregnant via a sperm donor. After discovering that she was pregnant, Chip decided to pull back from their burgeoning relationship and return to Los Angeles to film a special reunion series of Eligible. Meanwhile, Liz started a casual sexual relationship with Darcy, despite the fact that she professed to dislike him. The day Liz intended to leave Cincinnati, Darcy told her that he was in love with her. He did so in such an insulting fashion that Liz told him she wanted nothing to do with him.

Liz visited her friend Charlotte in San Francisco, where they decided to visit the Darcy family home, Pemberley. Unexpectedly, Darcy was there and he invited them to dine with his family. Darcy and Liz became closer during her stay in San Francisco until she was urgently called to return to Cincinnati. Lydia had eloped with her boyfriend Ham after her parents had responded negatively to the revelation that Ham was transgender. Back in Cincinnati, Liz received a text message from Darcy’s younger sister Georgie which made Liz think that Darcy was dating Chip Bingley’s sister Caroline.

Chip proposed to Jane, but explained that, due to his contract, they could either film their wedding for Eligible or wait another year. Jane agreed to appear on the show and all the Bennet family flew out to LA for the wedding. At the wedding, Liz discovered that Darcy had spoken to her parents about Ham in order to help them understand Ham’s decision to change his sex. Caroline Bingley accused Liz of trying to steal Darcy from her. Liz switched off her and Darcy’s microphones and asked him to marry her. He said yes.

When the Bennet family appeared on Eligible, the audience mislabelled Liz a hard-drinking party girl. In the final chapter, Mary reflected how silly it was that her sisters were so obsessed with men and concluded that she was happier pursuing her career, enjoying her hobbies, and remaining single.