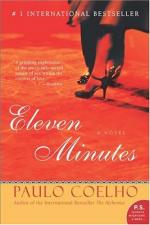 Paulo Coelho
This Study Guide consists of approximately 33 pages of chapter summaries, quotes, character analysis, themes, and more - everything you need to sharpen your knowledge of Eleven Minutes.

This detailed literature summary also contains Topics for Discussion and a Free Quiz on Eleven Minutes by Paulo Coelho.

Eleven Minutes is the story of a young girl named Maria who leaves her Brazilian home to go to Geneva, Switzerland, in hopes of great adventure and great love. Her situation does not prove to be what she had hoped and she pursues a career in prostitution in order to make money quickly in order to return home. During her time in Switzerland, Maria experiences pain, pleasure, and love and must decide the correct path for her life.

Maria grows up in a small town in the interior of Brazil where folklore, superstitions, and traditional roles for women are woven into the culture. Although she is good at school and always tries to better her situation by reading books, Maria's only goal is to fall in love, marry, and raise a family. Maria has several experiences with young love but her true love never appears, leaving Maria to believe that she is destined to live without that most important element that she believes most people find.

Maria is different from other girls in her town in that she craves adventure, but it is not until she has graduated and has worked two years in a draper's shop that Maria can save enough money for a small vacation. Maria goes to Rio de Janeiro, where she is approached by a Swiss entertainment businessman and is coaxed to fly back to Switzerland with the man and work in his nightclub as a samba dancer. Immediately upon her arrival, Maria learns the truth about the arrangement and will receive much less money that she had hoped, forcing her into a lifestyle much more restricted than the one she had imagined.

When the man discovers that Maria has dated a man she had met at the club, she is fired. Fortunately, the man helps Maria get a generous severance package and Maria is able to live for awhile while she looks for more work. Maria signs up at a modeling agency and meets a client to discuss a fashion show, but Maria ends up sleeping with the man for money. This is the beginning of Maria's career as a prostitute, something she does because it is good money for relatively little investment.

Maria works as a prostitute at a club on a street in Geneva, which is famous for such places. She has many clients and makes a lot of money, which she plans to use to fly back home to Brazil in a year's time. During her time in Geneva, Maria experiences many types of sex, but does not allow her soul to enter into the process. Maria is also introduced to the practice of sadomasochism, which she may have been inclined to pursue had she not met a painter who falls in love with her and convinces Maria that she can find love without physical pain.

Maria falls in love with the painter who, in a wildly romantic gesture, meets Maria at the Paris airport when she is on layover on her trip home to Brazil. Although it is not clear that she will marry the painter, at least Maria has found mutual love, something she thought would elude her all her life. For the first time in a long time, Maria loves with her soul as well as with her body.

More summaries and resources for teaching or studying Eleven Minutes.