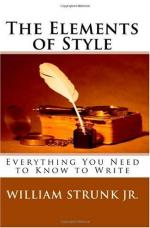 Books Like The Elements of Style by William Strunk Jr. | Suggested Reading

Gary Hoffman and Glynis Hoffman, authors of Adiós, Strunk and White: A Handbook for the New Academic Essay (1999), urge young writers to say goodbye to traditional grammar, organization, and objectivity. Their book provides a stark contrast to the style taught by Strunk and White.

The New York Public Library Writer's Guide to Style and Usage (1994), edited by Andrea Sutcliffe, is as comprehensive (at 838 pages) as The Elements of Style is brief. It delves into issues such as special characters used in foreign languages and gender bias in language.

On Writing: A Memoir of the Craft (2000), by best-selling author Stephen King, is part autobiography and part writing textbook. King covers everything from paragraphs to plotting and even...