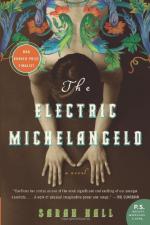 Sarah Hall
This Study Guide consists of approximately 62 pages of chapter summaries, quotes, character analysis, themes, and more - everything you need to sharpen your knowledge of The Electric Michelangelo.

This detailed literature summary also contains Topics for Discussion and a Free Quiz on The Electric Michelangelo by Sarah Hall.

The Electric Michelangelo follows the life of Cyril (Cy) Parks from ages 7 to 66. As a boy, Cy carries basins of blood spit up by the consumptives who frequent his widowed mother's resort hotel and he grows fascinated by the revolting liquid. With two best friends, Cy experiences boyhood adventures and adolescent sexual frustrations, gradually forming an adult personality that will limit and frustrate him. As the town celebrates victory in World War I, Cy encounters the man who will alter his fate, Eliot Riley. Riley is a social pariah more because of his drunken, obnoxious, non-conformist behavior than because of his shady occupation of tattooing.

Years pass before Cy and Riley actually meet and in the interim Riley observes the boy's artistic promise and resemblance to the women he evidently secretly loves. One afternoon, Riley confronts Cy with characteristic bluntness and self-importance and offers him an apprenticeship. Having given the trade no thought and having heard only bad things about this tattooist, Cy is unconvinced. Riley gives him until night to think it over, enticing Cy with a preview of his decorated belly. When Cy sees Riley at work and views the full canvas of his body, he is instantly convinced and accepts the position. Cy's mother Freeda convinces herself it is for the best.

The apprenticeship is rocky. Riley is an unorthodox, egotistical, demanding, frustrating and discouraging teacher. Cy remains with him when his mother dies and he stays ten years until Riley commits suicide. Throughout the period, Cy is the old drunkard's nursemaid as well as his lackey. Nevertheless, Cy fully masters the craft, philosophy and psychology of tattooing and becoming a "freehander," an artist skilled enough to work without preliminary sketches. With Riley dead, there is no shadow to live in and Cy strikes out for America to live and work as he wishes under the moniker "The Electric Michelangelo." During the Atlantic passage, Cy understands what Riley has been telling him over the years.

Cy settles in Brooklyn and works at Coney Island, the world's greatest and most corrupting amusement park. He makes friends and prospers, but he is constantly haunted by his mother and Riley. He measures every aspect of life by their measurements. Seven years after his arrival, during which Cy lusts for the shadowy woman in the apartment below him, he finally meets Grace and her horse, Maximus. Grace and Maximus work in the Coney Island circus and she seems to know everything about Cy.

Grace says it is time for change and the change will involve Cy. Grace wants her entire body covered with patterns of black and green eyes and Cy complies, fighting back rising desires for her naked body. Shortly after the work is finished, during which they never consummate their shared passion, Grace is horribly disfigured by a religious zealot who throws acid and ammonia on her. Grace survives as Cy begins to hate everything. Grace enlists Cy and a friend to help her get revenge by gouging out the assailant's eyes. They separate and vanish.

Cy returns to his hometown after the war and reestablishes the tattoo shop. His demons are mostly behind him. On the verge of retirement, a freaky teenage girl, the granddaughter of the first lust of Cy's life, appears in Cy's shop and ingratiates herself to him. She is settling in as his apprentice as the novel ends, with the promise of Cy's passing on the ancient lore.

More summaries and resources for teaching or studying The Electric Michelangelo.