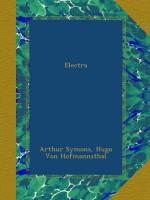 Aegisthus is the lover of Clytemnestra, and together they killed Clytemnestra's husband, Agamemnon. Aegisthus is presented as a weak man and a bully. One of the servants says that he beats Electra. Electra refers to him as a woman, and speaks sarcastically of "that brave murderer." Aegisthus appears only near the end of the play and is murdered by Orestes as soon as he goes into the house.

Chrysothemis is Electra's younger sister. She is a gentler spirit than Electra and unlike her sister, she is not obsessed by the murder of her father. She is, however, deeply disturbed by her current situation. Frightened and confused by day and night, she cannot remain still and runs from room to room. She feels as if she is lost to herself and blames Electra for the fact that they are both confined to the palace. If Electra were not...