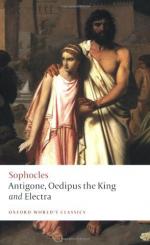 Sophocles
This Study Guide consists of approximately 35 pages of chapter summaries, quotes, character analysis, themes, and more - everything you need to sharpen your knowledge of Electra.

Another of Sophocles's tragedies, Antigone tells of a woman's straggle to bury her brother's body against the orders of the king. Like Electro, it features a strong female character and involves the conflict between family and politics. Antigone is the last play in the Oedipal trilogy.

William Shakespeare's Hamlet bears many similarities with Electra, including the murdered father, the widow's marriage to the murderer, and ineffective efforts at revenge.

For a very different kind of tragedy, consider Arthur Miller's Death of a Salesman, which relates the tribulations of an average man whose flaw is a naive obsession with the American Dream.