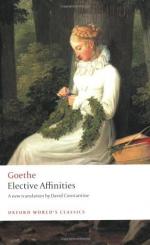 Johann Wolfgang von Goethe
This Study Guide consists of approximately 40 pages of chapter summaries, quotes, character analysis, themes, and more - everything you need to sharpen your knowledge of Elective Affinities;.

When Charlotte tries to send Ottilie back to school, Edward leaves Charlotte, saying that if she sends Ottilie away, he will go get Ottilie. Edward, feeling that death is preferable to his situation, goes off to war. Charlotte learns she is pregnant (with Edward's baby) and hopes this will save her marriage. When Edward comes back from war, he feels he has waited long enough and goes to the castle to insist that Charlotte grant him a divorce. Edward finds Ottilie reading by the pond, with the baby. Edward has already decided that the Captain should raise this child as his own. When Ottilie hurries back to the house, she drops the baby in the water, and he drowns. When Charlotte learns what has happened, she feels like it is her fault, for trying to keep Edward and Ottilie apart. She encourages Ottilie to marry Edward after all, although Charlotte has no intention of marrying the Captain.

Ottilie stops speaking, and will only eat in the presence of her maid. One day, she dies, and the maid reveals that for some time, Ottilie has been starving herself to death. The maid throws herself off the roof as Ottilie's funeral procession goes by but is miraculously healed by touching Ottilie's body. Edward soon also dies, while looking at his mementos of Ottilie. Charlotte buries them side by side in the same chapel that holds her dead baby, and makes a rule that no one else can ever be buried there. Edward and Ottilie lie side by side, waiting for the day when they will wake again, and be gloriously reunited in pure love.

More summaries and resources for teaching or studying Elective Affinities;.