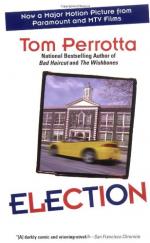 Winwood High School is the setting for the majority of the novel "Election" by Tom Perrotta. It is located in suburban New Jersey and it is where Mr. M. teaches, and where Paul Warren, Tammy Warren, Tracy Flick, and Lisa Flanagan attend classes. It is also the site of the SGA election.

Room 17 is located in Winwood High School, and it is the former classroom of Jack Dexter's English class. It is also where he and Tracy Flick begin their affair.

The auditorium is located at Winwood High School. It is where the presidential candidates give speeches and the election results are announced.

Griffin's Chevrolet is the used car dealership run by the Griffins, a father and son team. The younger Griffin is a former student of Mr. M.'s who offers him a job which Mr. M. accepts.