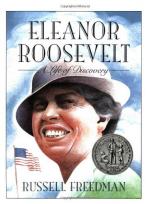 Russell Freedman
This Study Guide consists of approximately 31 pages of chapter summaries, quotes, character analysis, themes, and more - everything you need to sharpen your knowledge of Eleanor Roosevelt.

This detailed literature summary also contains Topics for Discussion and a Free Quiz on Eleanor Roosevelt: A Life of Discovery by Russell Freedman.

Eleanor Roosevelt, A Life of Discovery, is the story of Eleanor Roosevelt, First Lady, champion of the weak and poor, UN delegate and one of the most beloved figures in American history. Sixteen years after Franklin Roosevelt died and she vacated her post as First Lady, she was still voted the country's most popular person—winning out over presidents and generals.

Anna Eleanor Roosevelt was born into a wealthy family. Both her mother and father came from New York's high society. Eleanor was the first child of the handsome sportsman, Elliot Roosevelt, and his wife Anna, a legendary beauty and glamorous woman. Eleanor felt a remoteness from her mother at an early age which she attributed to her plain—she even said ugly—appearance. Anna placed a great deal of importance on beauty and Eleanor knew from an early age that she fell far short of that mark. Eleanor idolized her father who recognized the intelligence, natural charm and abilities that his daughter possessed. Unfortunately, Eleanor was abandoned by both parents by age ten. Her mother died of diphtheria at age twenty-nine and a few years later, Elliot—who was an alcoholic and addicted to pain killers—died from a bad fall when he was on a drunken binge.

Eleanor and her brothers were then raised by Mary Hall, their maternal grandmother. That household had its share of problems, which Eleanor had to learn to navigate through. Two adult uncles who lived at home were playboys and drunks and two adult aunts who lived with their mother went through numerous love affairs and had emotional problems. Eleanor flourished when she was sent to Allenswood, an elite finishing school in London, where she was recognized for her intelligence, kindness and abilities. After her return to the States, Franklin began courting her and they were soon engaged.

After Franklin became bored with his law practice, he entered into politics. He served in the New York State senate, was named Assistant Secretary of the Navy, ran on an unsuccessful ticket as VP and was elected Governor of New York. During these years, Eleanor had to put her shyness and reserved ways aside and become the political wife and partner. She was intrigued by the issues of the day that faced the country and the world and developed a keen interest in politics. Tragedy struck the family during the couple's early political days. They lost a seven-month-old son, Franklin, Jr., to sickness. Franklin was stricken with polio, which caused him to be permanently paralyzed from the waist down. Eleanor's heart was broken when she discovered that Franklin was having an affair with her social secretary. The couple made it through these tragedies but were scarred by them forever.

Eleanor came into her own as First Lady. The country had never seen a First Lady quite like Eleanor. She helped the movers move furniture around, insisted on driving her own car, held press conferences, traveled the world, wrote articles for newspapers and magazines and became a strong advocate for minorities and the downtrodden. Franklin was president during some of the worst times that the country had seen—the Great Depression and World War II. Though Eleanor had at first been less than enthusiastic about living in the White House and giving up her beloved teaching career, she knew that the country needed her husband and supported his reelections.

After FDR died, Eleanor was among the first delegates of the newly created United Nations. She became a strong voice for the millions of refugees around the world who were seeking political asylum after the war's conclusion. President Harry Truman referred to her as First Lady of the World. Eleanor traveled to all parts of the world spreading the goodwill of the United States and speaking out for justice and peace. At seventy-eight, age and health caught up with her. She was suffering from a rare blood disease when she died of a massive stroke.

More summaries and resources for teaching or studying Eleanor Roosevelt: A Life of Discovery.