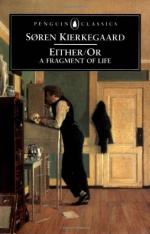 Søren Kierkegaard
This Study Guide consists of approximately 32 pages of chapter summaries, quotes, character analysis, themes, and more - everything you need to sharpen your knowledge of Either/Or.

"He explains that 'to choose oneself' is only another expression for the Socratic injunction 'to know oneself'" (p. xiii).

"Only after SK had returned to Copenhagen early in March 1842 was he completely free to devote himself to Either/Or, and presumably the whole of the first volume was written then, in about five months. The whole manuscript had to be copied by a scribe in order to preserve the secret of his authorship" (p. xiii).

"In conclusion, I must speak of the Sermon with which the book ends. It is described as an Ultimatum [originally in italics]. This means not merely a conclusion but a challenging conclusion" (p. xvi)

"My Friend, The lines upon which your eye first falls were written last" (p.5).

"Look you, my young friend, this is not the coquetry of the first days of love-making; it is not an essay in experimental eroticism, as...

More summaries and resources for teaching or studying Either/Or.