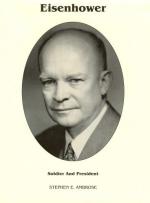 This detailed literature summary also contains Topics for Discussion and a Free Quiz on Eisenhower: Soldier and President by Stephen Ambrose.

Eisenhower Solider and President takes the reader not only through but also inside the life of Dwight Eisenhower from his early childhood in Abilene, Kansas, to his military beginnings at West Point, his time as Supreme Commander and President of the United States of America until his death at the age of seventy-three in 1969.

Eisenhower grew up the middle of six boys to David and Ida Eisenhower. As a young child growing up in Abilene, Kansas Eisenhower is taught that with hard work and determination there is nothing one cannot accomplish.

Early in his life Eisenhower feels a sense of duty to his country as he attends West Point Military Academy. Here he meets many friends that will remain with him throughout his life, such as Omar Bradley. Bradley will later serve under Eisenhower during World War II. It is at West Point that begins to show his ability for leadership when he is asked to coach the junior varsity football team after a leg injury ends his time playing the sport.

After leaving West Point, Eisenhower meets and marries the love of his life, Mamie Doud. They begin their family with the birth of their first son, Doud Dwight. They called him Icky. Soon their happy family is tested when Icky dies of scarlet fever when he is only four years old. Eisenhower turns to the military to help him get over the loss of his only son, and enrolls in the C&GS School. After graduating at the top of his class, Eisenhower returns to Washington, where he begins working for Douglas MacArthur. He remains with MacArthur until just before the beginning of World War II.

During the war, Eisenhower is the Supreme Commander of the Allied forces. His calm, decisive manner leads the Allies to such victories as the Liberation of France, D-Day, and the Battle of the Bulge. After the war ends, Eisenhower is made Truman's Chief of Staff.

When Eisenhower returns to the United States after World War II, everyone is calling for him to run for president of the United States. Eisenhower, having no intentions of being president at this time, takes a job with Columbia University as their president. While at Columbia, President Truman asks Eisenhower to be Supreme Commander of NATO, which he gladly accepts. His job at Columbia was not as fulfilling as Eisenhower had hoped. Finally, in 1951, Eisenhower decides to run for the office and wins. In his eight years as president, Eisenhower is able to keep the country out of another war, balance the budget, and start the Interstate Highway Program, among many other things.

When Eisenhower finally retires from public service in 1960 he is recalled to service, so to speak, for advice by world leaders and sitting presidents alike until his death at the age of seventy-three in 1969.