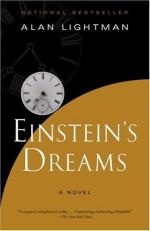 Alan Lightman
This Study Guide consists of approximately 32 pages of chapter summaries, quotes, character analysis, themes, and more - everything you need to sharpen your knowledge of Einstein's Dreams.

This detailed literature summary also contains Topics for Discussion and a Free Quiz on Einstein's Dreams by Alan Lightman.

Einstein's Dreams chronicles the dreams of Albert Einstein between April 14 and June 28, 1905, as he develops his theory of time as part of his theory of relativity. Each dream envisions a different world, with time behaving in a different way. The stories explore the relationships between people and time, an essential part of the human condition.

The story begins with Einstein in the patent office where he works, waiting for the typist who will type up his theory of time. Einstein has been dreaming about time every night. Einstein's dreams cast time in every conceivable form. He dreams that time is a circle, that time can flow backwards in isolated rivulets, and that time branches outward in parallel worlds.

In each alternate world with a different time, time affects how people live. People in one world choose to live regimented by mechanical time or by their body's fluid time. People in another world live on the mountaintops because time passes more slowly there. In yet another world, people take comfort in the rigid, constant nature of time. In the world where cause and effect aren't necessarily chronological, scientists suffer while artists thrive. In the world where time passes slowly, people fear change.

Einstein's dreams are intermittently broken up by interludes, which give Michele Besso's perspective of his friend Einstein, who is distant but brilliant. Einstein's dreams resume. Time is finite, scheduled to end in 1907. Time is sticky, and people become stuck at moments in their lives. Time brings order from chaos and confusion. Time is centered at a certain spot, where time stands still. In another dream, people do not remember the past. In the next dream, people's lives are governed by visions of the future. In yet another dream, people are obsessed with moving quickly to gain an advantage in time.

Einstein cannot share his dreams with his friend Besso. He dreams of a world where time travels backwards and people grow from old to young. Then, he dreams of a world where people only live one day. In the next dream, time travels at a different rate for each person. Then, Einstein dreams that people live forever. On June 10, Einstein dreams that time is a quality, instead of something to be measured.

More summaries and resources for teaching or studying Einstein's Dreams.