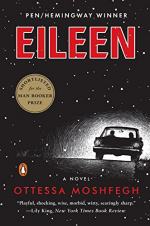 Ottessa Moshfegh
This Study Guide consists of approximately 53 pages of chapter summaries, quotes, character analysis, themes, and more - everything you need to sharpen your knowledge of Eileen.

This detailed literature summary also contains Quotes and a Free Quiz on Eileen by Ottessa Moshfegh.

The following version of this book was used to create this guide: Moshfegh, Ottessa. Eileen. New York: Penguin Press, 2015.

Set in 1964, the story is told by Eileen, the eponymous character, 50 years after the events of the novel. She is an older, mature woman who reflects back on the pivotal events that occurred when she was 24 years old. The story takes place in X-Ville, a place named so by Eileen because of its generic qualities as a typical New England town. Working at a male juvenile penitentiary she names Moorehead, Eileen lives with her retired police officer father who is an abusive alcoholic suffering from delusions, with her independent sister Joanie occasionally coming to visit. Steeped in self-loathing, Eileen dresses in her dead mother's old garments and works diligently to remain physically small through poor diet, fantasizing about an eventual escape to New York City.

Working as a secretary at Moorehead, Eileen helps begin preparations for Christmas at the facility, including decorating a tree and manning the spotlight at the annual Christmas Day pageant. Not finding any comfort in her work, Eileen focuses her attention on Randy, one of the guards at the facility who she places at the center of her fantasies. Randy is quiet and strong, and Eileen bounces between her sheer determination that Randy is only attracted to more attractive women while occasionally indulging in the idea that her and Randy will stumble into a relationship.

Spending most of her time mired in self-loathing or staking out by Randy's apartment, Eileen's world is shook when Rebecca Saint John is hired as the new director of education at Moorehead. She is different from the middle-aged curmudgeons that Eileen has been working for during her time at the facility. Rebecca is the definition of a beautiful woman, tall and lithe with red hair, and Eileen becomes enamored with her, doing everything in her power to be appealing to the newcomer. Their first exchange is a positive one and Eileen is ecstatic, fantasizing that Rebecca will be a turning point in her life, someone who will understand her and be her friend. Rebecca shows an interest in Eileen as well and they both have drinks a the town bar, O'Hara's, where Eileen is emboldened by the attention she receives as she accompanies Rebecca. Eileen gets black-out drunk and almost crashes her father's car outside their house, waking up in a puddle of vomit and being abused further by her father.

Around the time Rebecca is appointed at Moorehead, a new inmate arrives at the facility. Leonard Polk has been convicted of murdering his father, a police officer, in his sleep. Rebecca arranges to have Polk's mother visit, after which Eileen witnesses Rebecca's close contact with Leonard. Rebecca invites Eileen to her place for Christmas Eve, the latter further immersing herself in fantasies about the growing friendship between the two. Simultaneously, Eileen continues her plans to leave X-Ville.

When Eileen arrives at Rebecca's home on Christmas Eve, she is surprised to find a broken-down home in a shabby neighborhood of town. Further, Rebecca is distant and cold, their early chemistry not at play. Eileen makes multiple attempts to leave but is held back by Rebecca, who finally reveals that the home is not hers, but belongs to Mrs. Polk. Rebecca confesses that she spent time with Leonard Polk and learned that he had been raped by his father, with the full awareness of his mother. The earlier visit was an attempt by Rebecca to draw a reaction from Mrs. Polk, whom she eventually confronts and attacks, tying her in the basement. After being begged by Rebecca, Eileen agrees to intimidate Mrs. Polk with her father's gun.

After repeated attempts to coerce a confession, Mrs. Polk confesses her crime to Eileen, acknowledging that she was aware of the rapes and played along due to the improving relationship with her husband. Rebecca attempts to get a written confession but accidentally shoots Mrs. Polk in the arm. Eileen takes control of the situation, creating a plan that includes driving Mrs. Polk to her home, shooting her to death, and putting the gun in her father's hand. Rebecca reluctantly agrees and promises to meet Eileen later in order to escape the city together.

Knowing that she will never see Rebecca again, Eileen drives Mrs. Polk out of the city, leaving her in the car while she walks a distance and hitchhikes to New York City. An older Eileen reflects on the transformative week in her life, thinking about the change in her life and personality and how much happier she is now. She thinks about her final memories of the day she left X-Ville, her lack of regret at leaving the town and her father behind, at peace with herself with the decision she made.

More summaries and resources for teaching or studying Eileen.