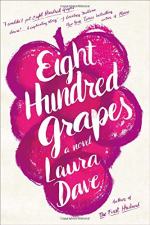 Related Topics
The Last Thing He Told Me

Laura Dave
This Study Guide consists of approximately 36 pages of chapter summaries, quotes, character analysis, themes, and more - everything you need to sharpen your knowledge of Eight Hundred Grapes.

NOTE: The following version of this book was used to create this study guide: Dave, Laura, Eight Hundred Grapes. Simon and Schuster, Inc., 2015.

When the reader is introduced to protagonist and Los Angeles attorney Georgia Ford, she is driving to her parents’ vineyard in Sebastopol, California, in Sonoma County. Georgia relates the story from her first person perspective and has taken the nine-hour drive from Los Angeles in a panic after having discovered that her fiancé has been harboring a secret.

In the week before Georgia was set to wed Ben, she was at her last wedding dress fitting when she saw Ben with another woman and child on the sidewalk outside of the dress shop. Georgia confronted Ben and learned that he has a four-and-a-half-year-old daughter with an ex-girlfriend that he has only discovered recently. Feeling betrayed by Ben’s decision to keep this information from her, Georgia has fled to her family home for comfort and to sort out her future.

When Georgia arrives in Sebastopol, still wearing her wedding dress, she sees her brother Finn at the family tavern before going to her parents’ home at the vineyard. At her parents’ home, Georgia is startled to discover a semi-naked man exiting her mother’s bedroom and comes to learn that her parents are separated and have not told her. Georgia’s mother, Jen, explains that she has been seeing another man named Henry who is a conductor for the San Francisco symphony.

Georgia also discovers that her parents have sold their winery, The Last Straw, to a company called Murray Grant Wines, a rival vintner. This move makes Georgia feel betrayed again upon learning that both of her brothers have known about and support the sale.

Through a series of flashbacks, the reader comes to know why Georgia’s father Dan bought the vineyard after leaving a scientific career. He has dedicated himself to improving the soil on the land and developing multilayered and organic wines of high quality. Dan believes in the concept of synchronization and applies this belief in both winemaking and in life. Jen, who was once a musician in a symphony orchestra, largely left behind her dreams in order to follow Dan’s dreams of winemaking.

The next secret that is unearthed at The Last Straw is the revelation that Georgia’s brother Finn is engaged in an affair with their brother Bobby’s wife, Margaret. Meanwhile, Georgia’s fiancé Ben has overseen the move of his and Georgia’s furnishings to London, where they plan to move after the wedding. As the days to the annual harvest party count down, Ben arrives at The Last Straw with his daughter Maddie and attempts to make amends with Georgia.

As Georgia attempts to reconcile her resentments and inner conflicts regarding her impending marriage and the separation of her parents, Bobby’s wife Margaret comes to speak with her. Bobby overhears their conversation and discovers the mutual attraction between Margaret and Finn, leading to more conflict. A fight breaks out between Bobby and Finn at the family dinner and wine tasting but is broken up by Dan.

In order to cope with her situation, Georgia throws herself into working at the winery with her father and they discuss Dan’s plans for the future. After the sale of the winery is finalized, Dan intends to return to a vineyard in France where he originally learned winemaking. He intends to rent a yacht and travel the world with a woman he almost had an affair with many years ago. Dan also reveals that he had a heart attack in recent years and that event was what led to Jen’s affair with Henry.

When the day of the annual harvest party arrives, Georgia files an injunction at the courthouse to stop the sale of the vineyard. At the party, tensions run high between the couples of the Ford family and Georgia learns from Ben’s ex-girlfriend Michelle that Ben had visited London in the past month to care for Maddie while she was filming a movie. Georgia confronts Ben about this lie, as he said he was finalizing the purchase of their house in London at the time and never mentioned his daughter.

Georgia goes to the winemaker’s cottage to get away from the situation and finds her brother Finn reheating a frozen lasagna made by their mother on the stove. While it heats, their mother interrupts to announce that Dan is making his final toast and the family gathers outside. During the toast, the cottage goes up in flames and the family rushes to put out the fire. Firefighters arrive along with a downpour of rain and the cottage is saved; however, the last block of grapes is threatened by the rain so the family rushes to the vineyard to pick them before it is too late.

While the family picks the final grapes, Dan collapses from another heart attack and is rushed to the hospital. This event leads to the resolution of many of the novel’s conflicts: Georgia calls off her wedding with Ben and suggests that Ben move to London without her; Jen and Dan are reunited and renew their wedding vows; and Georgia manages to buy the vineyard back from Jacob, the CEO of Murray Grant Wines.

In the final chapter, Georgia looks out over her vineyard as Jacob and Finn arrive. Georgia has begun a relationship with Jacob and looks forward to her new and unexpected future. Eight Hundred Grapes incorporates the process of winemaking and the process of living life to explore themes of family, secrets, synchronization, and forgiveness.