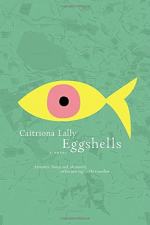 This detailed literature summary also contains Quotes and a Free Quiz on Eggshells by Caitriona Lally.

The following version of this book was used to create the guide: Lally, Caitriona. Eggshells. Liberties Press, 2015.

Vivian Lawlor moves into her great-aunt's house, informing contacts of the latter's passing, then notes the names of magical sounding place names. She goes out into town to find one of them, trying to go to another world, but fails, noticing that street signs have been painted over on the way home. She decides the next day that she wants a friend called Penelope then starts posting an ad for one. Her neighbors inquire as to why she is doing this to which she has no real answer. She receives a letter informing her of a social work visit soon, then while at a cafe she receives a message from someone called Penelope wanting to meet her tomorrow. After practicing her upcoming conversation with Penelope, Vivian goes to meet her new friend and it is quite awkward. She wanders around town afterwards imagining who or what might be in the buildings she passes, continuing to write down what she likes, then goes home. The next day Vivian decides to search for a job but does not find one that is suitable, then feels as though she needs more blue, then gold, in her day, so she goes to buy blue foods and a goldfish. The next morning she receives a visit from the social worker who is perturbed by her behavior and leaves quickly.

Vivian takes a bunch of lemons with her to Lemon street in the hopes of attracting otherworldly creatures then goes to the Natural History museum to write down the most interesting creature names. In the middle of the night she feels the need to watch the clock, then in the morning she goes to visit Penelope where they talk more about what they like. Penelope becomes upset when talking about her past and Vivian does not know what to do, but they agree to meet again soon. The next day Vivian writes down certain words from books to try to find a pattern then donates books with notes in them to a charity shop. She looks at statues and buildings then passes through an archway in the hope that it will take her to another world, running into her neighbor on the way home. She decides to visit her sister's family so drops in for a surprise visit, which is not welcomed by Vivian's sister, who suggests she leave. Vivian goes to places with the words "emerald" (71) and "yellow" (71) in the names hoping to find a way back to another world again, then takes a taxi to the airport in the hopes of finding a pattern in the departure board listings. After saying a while she goes to the bus station to try her luck there then returns home. The next day Vivian puts money in the pockets of clothes in a department store, then writes down some graffiti she sees in the grounds of a college. She buys a hoodie then later that night sneaks out of the house to claim a piece of furniture before it is collected. She invites Penelope over only to wish she would leave again.

Vivian wakes up to notice that her goldfish is not looking good then later she asks a taxi driver to drive her across all the bridges. She visits a pagan well then goes to a museum to talk to one of the bog bodies on display, then writes down the names of the interesting names of things. She consults a book on mythology which tells her that she needs to change swans from one of the myths back into children in order to turn into her true self, so she tries to lure swans away in the park which does not work, then makes more notes in her notebook. The next day she goes to the cemetery and decides to buy a burial plot for herself, but is unable to afford one. She writes down names of the plants and flowers in the botanic garden, then is invited by Penelope to go on a weekend trip. They travel to meet Penelope's mother where Vivian struggles to talk so she goes to the beach to collect shells. After an argument with her mother Penelope says that they need to leave again then they drive back into town.

Vivian tries to buy food at a cafeteria but does not have enough money so she draws it instead, then goes to the library to look at unusual collections. She resolves to have a dream that night. She looks for a hobbit the next day, with no luck, then gets Penelope to help her dig a hole in her garden. She empties the goldfish bowl into the hole to give her goldfish a change of scenery. The next day she finds that her goldfish has died so she holds a funeral for him then goes to the hairdresser. After an awkward conversation and a haircut, she goes home. She becomes preoccupied with the idea of "kiosks" (167) then spends the day looking for different kiosks to get into, being escorted away by security at one point. She goes home to invent new words and search for jobs, then receives a call from a telemarketer who ends the call soon after she starts asking him questions off the script.

Vivian invites her sister and family over for dinner and makes it from scratch but burns the dinner. They arrive and find the food inedible and it is awkward until Vivian asks about the children and politics which they talk happily about. Her sister talks about their upcoming vacation to France and Vivian offers to replicate the experience but her sister decides they have had enough and they leave. The next day Vivian notices a rainbow and goes to an old building to find the end of it where she hopes to find a leprechaun. She meets someone there who seems suspicious, then she goes home to watch TV only to end up turning it off again. She decides to send letters to random people both locally and internationally then puts the messages in a bottle to take to the beach and throw into the sea. When coming home she empties her bookshelf of certain books only to change her mind then restock them again. Penelope visits again so Vivian goes to get baking supplies then tells Penelope that she needs to brew eggshells because that is how a changeling would end up being send back where they came from. Vivian ends up scalding herself then they have some cake. Sometime later in the year Vivian goes to Penelope's house to create a rainbow so they can summon a leprechaun but it does not work so they go outside and have some wine. Vivian calls her sister to talk about the trip to France but her sister tells her she is not coming and hangs up. Vivian and Penelope decide that they will go on their own vacation together so Vivian goes to pack and get ready to leave.