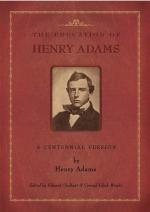 Adams described the unity of the medieval world-view as being reflected through its cathedrals in Mont-Saint-Michel and Chartres. The work was published privately in 1904.

In A Letter to American Teachers of History (1910), Adams calls upon his fellow historians to make whatever changes necessary to the curriculum in order to prepare students for the technology of the twentieth century. In his letter, Adams expresses a fear that if education is not reformed, the consequences may be dire.

Adams refers to Jean-Jacques Rousseau's Confessions as a model for his work. Rousseau wrote his autobiography as a justification for his actions in hope that he might regain his friends and country. The work was posthumously published beginning in 1782.

An experimental novel by Laurence Sterne, entitled The Life and Opinions of Tristram Shandy, Gentleman, was a surprising success from the moment of its release...