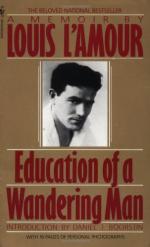 Louis L'Amour's hometown was Jamestown, North Dakota. He lived there till he turned sixteen when he left to wander the earth.

Books were L'Amour's main companion during the years he was a wanderer of the world seeking an education.

When Louis L'Amour's high school class was preparing to graduate, Louis was half a world away in Singapore.

The Liverpool Kiss was a karate move that one of L'Amour's seagoing peers taught him. In the move, the opponent is caught behind the neck, his face is jerked down and meets the up coming skull. If done properly, the opponent's face is pretty much rearranged.

The Ballad of Fisher's Boarding House

The poem, "The Ballad of Fisher's Boarding House," was in Kipling's "Departmental Ditties." L'Amour liked to quote from the poem.

This is the location where the old-timer Peterson claimed...

Education of a Wandering Man from BookRags. (c)2023 BookRags, Inc. All rights reserved.