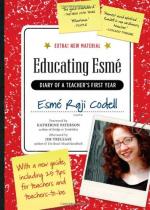 Esmé Raji Codell
This Study Guide consists of approximately 29 pages of chapter summaries, quotes, character analysis, themes, and more - everything you need to sharpen your knowledge of Educating Esme.

This detailed literature summary also contains Topics for Discussion and a Free Quiz on Educating Esme: Diary of a Teacher's First Year by Esmé Raji Codell.

Educating Esme reproduces the journal of Esme Raji Codell, a first-year teacher at an urban Chicago elementary school. Codell describes her day-to-day feelings and impressions, dealing with difficult children as well as a difficult principal and administration.

At age twenty-four, Codell is invited to work at a new public school by principal Mr. Turner. After a period of administrative work, she will teach the fifth-grade. Even at this early stage, Codell butts heads with Mr. Turner, who is a pompous, demanding, and shortsighted man.

Codell is very ambitious, and an initial proposal for an elaborate Fairy Tale Festival is rejected by a school committee. The first day of school begins. Most of Codell's students are black. She institutes several innovative teaching methods, such as calling Math "Puzzling" to allow students to view the subject with a fresh perspective.

Undeterred by her failure with the Fairy Tale Festival, Codell successfully arranges for a famous author, Connie Porter, to visit the school for an assembly. She is also successful in staging a "Cajun Christmas" for the Christmas assembly.

As the second semester begins, Codell continues to teach in creative ways. She makes a "time machine" from a refrigerator box to teach about history, and has an outdoor lesson to teach about trees. She also must deal with some problematic students, again in creative ways. To teach troublesome student Billy Williams a lesson, she makes him "Teacher for a Day." She also stresses the Golden Rule when a student stabs a substitute teacher with a pencil. Codell continues to fight with Mr. Turner. Codell insists on the title "Madame Esme," which irks conservative Turner, and Codell nearly quits over the issue before talked out of it by a fellow teacher. Things continue to sour between the two, with Codell referring to the teachers' union, but eventually Mr. Turner tells Codell she is an impressive teacher, and that she will be retained for the next school year.

Codell continues to have a love-hate (usually hate) relationship with the bureaucracy. She resents the conformity preached by administrators, and scoffs at the idea of conforming to "Jordan Rules," a set of teaching principles developed by basketball star Michael Jordan's foundation.

The second semester features more problems with discipline. Student B. B. is a particular problem, Ozzie overeats at lunch, and Asha brings her two-year-old brother to class. Through it all, Codell scores a success by creating the Storyteller Festival, a schoolwide event. At the end of the year, Codell learns her students scored very well on the standardized test.

She has a teary goodbye on the last day, and is given a signed gold scarf by her students. In a brief epilogue, Codell attends the graduation of some of her students from middle school three years later, and remarks that little has changed.

More summaries and resources for teaching or studying Educating Esme: Diary of a Teacher's First Year.