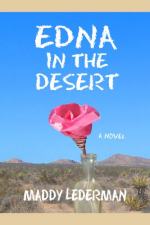 Maddy Lederman
This Study Guide consists of approximately 37 pages of chapter summaries, quotes, character analysis, themes, and more - everything you need to sharpen your knowledge of Edna in the Desert.

Edna in the Desert Summary & Study Guide includes comprehensive information and analysis to help you understand the book. This study guide contains the following sections:

This detailed literature summary also contains Quotes and a Free Quiz on Edna in the Desert by Maddy Lederman.

“Edna in the Desert” is a young adult coming of age novel by Maddy Lederman which recounts the experiences of thirteen year-old Edna as she spends the summer with her grandparents in their California desert home. When the novel begins, Edna is a very spoiled, very disrespectful girl whose parents are very wealthy. Her parents have had enough of her misbehavior and rudeness, so they decide that Edna will spend the summer with her grandparents near the quiet, dusty town of Desert Palms. Edna is horrified. There is no cell service, no television, and no internet. Her only source of entertainment are a bunch of women pioneer books her parents have purchased for her for the stay.

Edna is unsure of her grandparents, either. Grandma is large, imposing, and hardworking. Grandpa is quiet, withdrawn, and sits on the porch all day. Edna decides to head off into the desert, determined to die rather than spend the summer in such a horrible place. Yet as she begins to sweat and grow thirsty, death does not seem to be a good option. She passes out, and upon waking discovers a handsome boy on a dirt bike headed for her. The boy introduces himself as Johnny, and reveals that a search is underway for her. Johnny radios in that he has found Edna, and brings her back to her grandparents’ place. Edna is smitten with Johnny.

Back at the house, Sheriff Wegman warns Edna about the grave dangers of wandering off into the desert. The newspaper even prints a story about the event, which confirms in Edna’s mind how boring the area is. Through the article, she learns that Johnny is seventeen. Despite the fact that he is older, she decides to pursue him. She is thrilled to discover his family owns the town’s grocery store, and that Johnny makes deliveries out to Grandma each week. She looks forward to his next visit. In the meantime, Grandma puts Edna to work doing chores and tending to the property. It is work Edna has never done before. At the same time, Edna reads her books about pioneer women who gave up safety and security to travel West. Edna comes to have great respect for them, and for her grandmother, as she does her own chores and completes her own tasks.

Each time Johnny shows up, Edna dresses as cutely as she can, and does her best to flirt with him. She asks him to bring her to an oasis. He does so with Grandma’s permission. The two end up kissing, but Johnny insists it cannot happen again because he is too old. Edna strongly disagrees. She decides to plan a birthday party for Grandpa because she knows Johnny will attend. She uses old silverware, dishware, old white Christmas lights, and old furniture found in the garage to prepare an outdoor setting. Grandma is even moved to bake a pineapple upside-down cake for the occasion, and to prepare other food.

The guests arrive, and are thrilled. Edna learns more about her Grandpa since many of those in attendance are Vietnam veterans like Grandpa. One even goes so far as to credit Grandpa with saving his life. While music is playing, Edna is stunned to see her grandfather stand up and tap his foot, the most movement she has seen from him. She knows the time he spent in prison, together with his head injury from the war, have made him a near-invalid, so his movement is a welcome thing. Edna is complimented by everyone, including Grandma, for what she has done. It makes her feel guilty because she did it to get Johnny to come over, not out of love for her grandfather.

Edna’s further efforts to romantically pursue Johnny do not work out. As a result, she begins to grow closer to her grandparents, taking comfort in their presence and their stability. She and her grandparents go into town to attend church and go out to eat afterward. Edna is once again stunned and thrilled when her grandfather orders coffee for everyone. As the summer ends and her parents come to pick her up, Edna sits out on the front porch with her grandmother and grandfather. She knows she should have done it sooner. She also knows she will be coming back to the desert.

More summaries and resources for teaching or studying Edna in the Desert.

Edna in the Desert from BookRags. (c)2022 BookRags, Inc. All rights reserved.