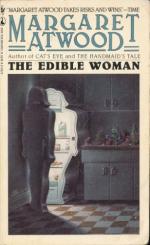 Margaret Atwood
This Study Guide consists of approximately 34 pages of chapter summaries, quotes, character analysis, themes, and more - everything you need to sharpen your knowledge of The Edible Woman.

This detailed literature summary also contains Topics for Discussion on The Edible Woman by Margaret Atwood.

“The Edible Woman” was first published in 1969 and was written by the Booker Prize-Winning author Margaret Atwood. Due to the book’s exploration of gender stereotypes and when it was released, many have associated it with the feminist movement in North America. Margaret Atwood insists that the book should actually be considered “proto-feminist” because she completed writing it in 1965. Switching between the first-person and third-person narrative and painting an accurate picture of the typical issues a young professional woman dealt with in the 1960s, The Edible Woman is a study in the evolution of women’s roles in the mid-20th century.

The book opens with a typical day in the life of Marian McAlpin. She is a college graduate in her mid-20s who works writing questionnaires for a survey company. She types up the questionnaires on the products that the company is testing and goes door-to-door asking questions of consumers. She lives with her roommate Ainsley in a small apartment, that is a converted servant’s quarters and part of a larger home. The woman who owns the home lives downstairs with her teenage daughter and is very strict about what her tenants do so that it will not corrupt “the child.” Marian and Ainsley have only known each other for a few months but have an amiable roommate agreement where each cleans and is busy with her own job and life.

Marian has been dating Peter for several months and only sees him on weekends. He is a handsome young lawyer who lives in a nice apartment and Marian believes that their relationship is exclusive, but casual. When Peter’s last college friend gets married, he is deeply troubled. When Marian sees him a few days later, however, his mood seems to have changed. Peter asks her why the two of them “shouldn’t get married” and Marian is surprised at the proposal, but accepts. She tells Ainsley who thinks it is a bad idea and decides not to tell anyone at work for fear of losing her job. Ainsley also confides in Marian that she has decided to have a baby, but not bother with getting married. Marian disapproves but can see that Ainsley is determined.

One of Marian’s old college pals arrives in town and Ainsley shows up at a dinner date with Marian and Peter, dressed much younger than her age. She plans to seduce Len and make him the father of her baby and Marian is torn as to whether to warn her friend or let the cards fall where they may. Marian becomes overwhelmed when she feels like an accessory to Peter at the dinner and she runs away from the group. Len chases her and Peter and Ainsley try to head her off with the car. She cannot explain her erratic behavior and the group writes it off as her simply being drunk.

Two months later, Ainsley successfully seduces Len and discovers that she is pregnant. Len is furious but Ainsley maintains that she does not need him to be involved. After hearing a lecture at the Prenatal Clinic about the importance of a “father figure,” Ainsley changes her mind and tries to get Len to marry her. He refuses and she ends up marrying a willing man on the night that they meet.

As Peter begins treating Marian more like his wife and less like an individual, she develops an aversion to certain foods. It begins with a piece of steak, and then it extends to eggs, rice pudding and some vegetables. As she begins to wonder if she has a mental problem, Marian starts secretly seeing an English graduate student named Duncan. He is the extreme opposite of Peter but Marian finds that she is drawn to his neurotic ironing and co-dependence.

Despite the fact that Marian is getting married, Duncan suggests that the two sleep together. Marian becomes overwhelmed playing “wife” at a party at Peter’s apartment and agrees to Duncan’s proposition. The two spend the night in a seedy hotel and the next day, Marian goes to the grocery store and gets all of the ingredients needed to make and decorate a sponge cake. She shapes it to look like a woman and when an angry Peter arrives, she places it in front of him, accusing him of trying to destroy her. She insists that he devour the cake instead and their engagement is effectively ended. With Peter gone, Marian sits down and begins to ravenously eat the cake. Ainsley arrives to announce that she has gotten married and is leaving. Marian cleans the apartment for two days and eats a steak. Her relationship with food is back to normal. When Duncan arrives, looking for attention, she gives him the rest of the cake to eat.

More summaries and resources for teaching or studying The Edible Woman.