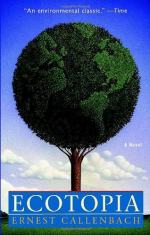 ENERGY FROM SUN AND SEA

The Ecotopians use more energy than many people would think, which is mainly due to their transportation system. They inherit a system of oil and gas power plants, which they shut down within a few years. They also are left with a number of atomic-fission plants, hydroelectric dams, and some geothermal power sources as well. All of these they consider temporary though, as they plan to replace them with direct solar power, wind power, and nuclear fusion.

The Ecotopians have a solar power systems ranging from the large silvered parabolic mirror, which focuses sunlight and sends steam through pipes to drive a generator, to the massive photo-cells, similar to the ones used in satellites. The cell banks, which cover an area of several miles, impressive as they are, pale in comparison to the Punta Gorda thermal...

Ecotopia: The Notebooks and Reports of William Weston from BookRags. (c)2023 BookRags, Inc. All rights reserved.