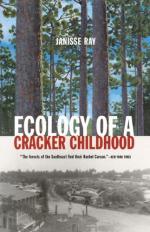 Ecology of a Cracker Childhood Summary & Study Guide includes comprehensive information and analysis to help you understand the book. This study guide contains the following sections:

This detailed literature summary also contains Topics for Discussion on Ecology of a Cracker Childhood by Janisse Ray.

The story of Janisse Ray as told in her book, "Ecology of A Cracker Childhood," parallels her own struggle throughout her childhood with the battle for survival of the longleaf pine forests of southeastern United States. Janisse was one of the four children of Lee and Franklin Ray. The family lived in a small house in a rural region of Appling County, on the outskirts of a small town named Baxley. Frank ran a salvage business for which he amassed old cars, car parts, discarded appliances and just about everything imaginable for his junkyard which was located just beyond the Ray's home. Janisse and her siblings were ashamed of the family business and of the cluttered junkyard that overpowered their home. If others asked what their father did for a living, the children would respond that he was a "salesman."

The children really had no worries about being embarrassed by their living conditions since Franklin, greatly influenced by the tenets of the strict Apostolic Church, disallowed the children from having friends over and in kind from his children visiting friends at their homes. Frank's two daughters could not wear long pants, cut their hair or wear jewelry or make-up. The children could not participate in sports or other activities at school. The family could not celebrate holidays like Christmas, Easter or Halloween. The eccentric and isolated conditions that the Ray children lived under had far-reaching impact on their lives and self-image. Poverty was another overbearing pressure on the family which further contributed the the children's feelings of desolation.

Long before the Ray children were suffering from isolation and abuse, the longleaf pine forests of the southeastern part of the United States were struggling for survival. The once pristine forests had begun their long decline when Andrew Jackson defeated the Creek Indians who had initially inhabited the region and who were then moved to reservations in the Arkansas. That left the rich, beautiful forests open to new residents—Celtic, Irish and Scottish migrant farmers and herders who took over the region. Demands by these transplants began more than a century of destruction that left the forests and the hundreds of animal and plants that lived there at risk for extinction. As the years wore on, desperation from the poverty in the region led to over-tilling of the earth and excessive logging of the mighty pines without an effective plan to replenish the region or consideration of what this overuse was doing to the inhabitants of the forest.

Janisse Ray's love of the pine forest and her hope to revive it was born somewhere amid her own struggle for self-worth. That she loved her family, despite all the hardships she lived under, comes through loud and clear in the account of her family life. What is also clear is Janisse's love for the pine forest and her hope and intention to see that it is one day be restored to its original glory.

Ecology of a Cracker Childhood from BookRags. (c)2022 BookRags, Inc. All rights reserved.