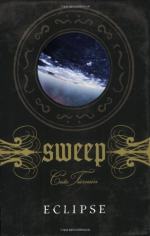 Cate Tiernan
This Study Guide consists of approximately 51 pages of chapter summaries, quotes, character analysis, themes, and more - everything you need to sharpen your knowledge of Eclipse.

Widow's Vale, NY is the main setting of "Eclipse" where the novel takes place. Widow's Vale is a small American town where Morgan and the other characters live. Ciaran sends a dark wave to Widow's Vale when Morgan refuses to join him, but Morgan, Alisa, Hunter and Daniel defeat the dark wave.

Kithic is Morgan and Hunter's coven in Widow's Vale. They hold circles every Saturday evening. Though Ciaran threatens Kithic, Hunter and Morgan decide not to tell the other members of their coven for fear of causing widespread panic.

Amyranth is Ciaran's evil coven who continues to send the dark wave to Widow's Vale after Ciaran's powers are stripped.

Practical Magick is Alyce's occult bookstore where Morgan and Hunter visit her. While visiting Alyce, Morgan finds a green Book of Shadows that turns out to have belonged to Sarah Curtis...

Eclipse from Gale. ©2005-2006 Thomson Gale, a part of the Thomson Corporation. All rights reserved.