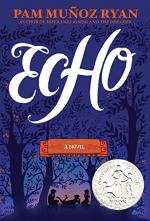 Pam Munoz Ryan
This Study Guide consists of approximately 56 pages of chapter summaries, quotes, character analysis, themes, and more - everything you need to sharpen your knowledge of Echo.

Otto is a young boy who is playing a game with a little girl named Mathilde. He hides in the woods and begins reading a book about a young boy named Otto. He suddenly realizes he has been in the woods for a long time and when he heads back toward the game, he becomes lost. He encounters three princesses named Eins, Zwei, and Drei, which translate to One, Two, and Three. Their father, the king, so desperately wanted a boy that he abandoned each of the girls to the care of a wicked witch. Otto reveals that his book is about the three girls and they beg him to read the ending so they will know what happens to them. To Otto's surprise, the book he is reading has no more words after the scene in which they meet. The moral of that story is that the princesses and Otto have to write their own story rather than reading about their lives in a book.

The princesses give Otto a magical harmonica with instructions to pass it along when it is time. He becomes the first messenger of the harmonica. No one believes his story about the princesses and he eventually stops telling it. He marries Mathilde and they have a daughter who needs medical attention that Otto cannot afford. He gets a job making harmonicas for a company but their dog chews up one of the instruments. Otto delivers the harmonica given to him by the princesses in place of the destroyed instrument.

The harmonica winds up in a German factory where a young man named Friedrich works. One day, Friedrich finds the harmonica in an abandoned storage room. He is a brilliant musician but has a birthmark on his face. Hitler is just coming into power and the situation becomes dangerous for Friedrich and his family. When Friedrich's father is arrested, Friedrich's sister Elisabeth contributes money to help Friedrich ensure their father's release. Just before he prepares to leave the harmonica factory, Friedrich remembers his uncle's warning that he is to take nothing of sentimental value with him. He polishes his beloved harmonica and places it in a box about to be shipped out to America. Elisabeth remains in Germany while Friedrich, his father, and his uncle escape from the country.

The harmonica winds up in an American music store. Mike Flannery and his younger brother, Frankie, are in the process of an adoption by a young American woman who lost her own son years earlier. A family friend purchases harmonicas for both the boys and Mike chooses Otto's harmonica from the box. He fears that he and Frankie are not secure in their new home and that he can earn a spot on a harmonica band. He does win but finds out that their new home is everything he and Frankie could have wanted. He eventually settles down to focus on the piano and passes his harmonica on to be donated to a group of school children.

Ivy chooses the harmonica next. She is a young Hispanic girl who has a great talent and is chosen to perform a solo on the radio. Before the performance, her family has an employment opportunity and they move. She struggles to fit into her new neighborhood but earns a set on the school orchestra. When their employer's son, Kenny Yamamoto, arrives home from the war for a brief visit, Ivy gives him the harmonica. When the harmonica literally deflects a bullet and saves Kenny's life, the spell on Eins, Zwei, and Drei is lifted and they are reunited with their mother and brother.

NOTE: This guide is based on the Kindle version of the novel, copyrighted 2015.

More summaries and resources for teaching or studying Echo .